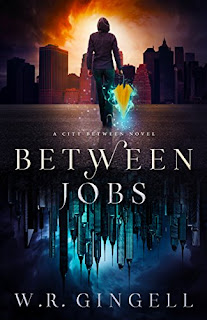 Take one determined, optimistic teen known only as Pet. Add a vain Korean vampire, a warrior fae bent on investigating the crimes of his kind, and his lethal, tea-drinking steward…and you get the core cast for Between Jobs, the first in a series of urban fantasy novels by W.R. Gingell.

Pet narrates the story, and her strong, quirky voice is well able to carry the tale. Between Jobs opens with a murder that thrusts her into the path of the otherworldly trio who investigate the crime. Pet’s nearing eighteen and living on her own in the house where her parents were murdered—but she never expected for another brutal crime to happen on her front doorstep.

She’s pinned her hopes on living under the radar until she comes of age, and then buying the house, to which she feels an unusual attachment despite the tragedy that befell there.

But the Behindkind have other ideas, and soon she finds herself thrust into a world strange beyond what she can imagine.

The story is deftly handled, and all the components come together to make an intriguing read that lays a strong foundation for the tale to unfold in subsequent books. The characters and their interactions will entertain, delight…and ultimately make you feel, and isn’t that what we’re all looking for in a story?

The connection between the human world, Behind (realm of the fae and other mythic creatures), and Between (the layer that binds them together) lends itself to all sorts of intriguing possibilities, and in this first story, we learn bits and pieces about the realms and the creatures alongside Pet. And with each answer come a number of additional questions—about the worlds and about the nature of Pet herself.

As an added bonus, the Aussie slang permeates the book. I love to savor new words, and I enjoyed the vivid colloquialisms that fill the City Between series.

In short, if you’re looking for a fast-paced read with compelling characters, pick up Between Jobs.   It’s the first of a projected ten book series, so if you like it, you’ll be able to stay for a while and journey with Pet and the Behindkind through their various adventures.

Are there any fellow fans of W.R. Gingell’s novels out there? If so, which tale of hers was your favorite?

Content warning: while otherwise clean, the book opens with the aftermath of a violent murder, and there are a few gory scenes, so if you’re sensitive to those sorts of things, you’ll either want to skim those parts or pass on the series.