The End of the Magi (Lizzie)

I love finding an author I like enough to read everything they write. For me, epic fantasy writer Patrick Carr is one of those authors, so of course I was excited about his latest release, The End of the Magi. (I am also excited about his upcoming interview on the blog next month, so stay tuned for that.) I finished the book in a few days and here are my thoughts on it.

The End of the Magi by Patrick Carr 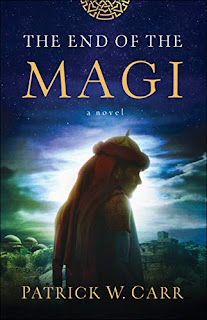 In short, if you’re interested in the magi, the “three wise men” or “the three king of orient,” or just love a good historical adventure, then this book is for you. It’s different from Carr’s other books in that it is not a fantasy but is Biblical fiction and it is a stand alone book instead of a series, but it retains his great characters and writing and general feel.

But for more specifics, here you go. Myrad is a young crippled Persian man adopted by a Hebrew magus (magi were advisors to kings) for a Parthian king two years prior. His father is one of the secret group of magi formed hundreds of years prior by the prophet Daniel to keep a calendar telling when the promised Messiah would come. When many of the magi get on the wrong side of the concubine determined to be queen, Myrad’s father is killed and Myrad is forced to flee, taking the calendar with him, along with some other documents that make him the focus of a very determined hunt. Unfortunately, a man with a club foot is easily spotted. Myrad takes refuge in a trade merchant’s caravan. As you might guess, he eventually joins up with other magi who keep the calendar and follows the star to visit Christ. It’s not an easy job and the story doesn’t end there, but returns to Jerusalem years later when Jesus is crucified. 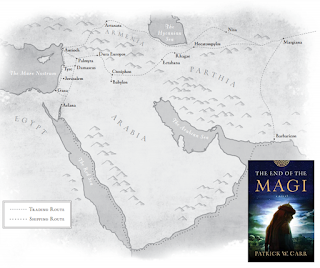 Myrad is a likable hero, one who had to struggle physically more than most heroes, which adds interest to him. I liked the other main characters as well, especially Walagash, the merchant, and his child Roshan. I won’t make any spoilers about the romance, but I like the girl, a very strong and talented young woman. As with any historical novel, I appreciate the way it helps me wrap my mind around the real people and places and cultures it depicts. Even though I have to separate some fiction from fact, I learn more this way often than through plain history. I can do my own research now and learn faster for the fictional introduction to the world. The explanation of the meanings behind the gifts the magi bring made them much more understandable--Jesus is prophet, priest, and king, and the gifts represent that. I knew many Hebrews of the time expected a Messiah to defeat the Romans and that some hated Jesus when it became obvious he wasn’t that kind of deliverer. Carr wove that perspective and others into the different characters for a fascinating look at what different people expected of Jesus and how they responded to him, weaving in scriptures that pointed to Jesus’s true purpose and how he fulfilled seemingly contradictory prophecies.

The End of the Magi is a great adventure story and one that broadened my understanding on the world in Jesus’s day. Definitely recommended.

Have you ever wondered about the magi? How do feel about authors writing in multiple genres?