Slow and Steady Can *Also* Win the Race! (Laurie)

It's that time of year again, where my social media feeds swarm with word counts and work-in-progress snippets and goals met and goals to be achieved. National Novel Writing Month.

In a way, I love it. Even though I'm not participating in NaNoWriMo, I am trying to make significant progress on my current project, and on many days it's inspiring to be surrounded by so much writerly ambition. I catch the tide of that excitement to propel myself forward on my own goals, feeling like part of a team or a runner in a marathon.

Then there are the other days. The days where I was proud to write 1,500 words, only to find out that everyone else around me ("everyone else" meaning approximately three people, because that's how my brain works) wrote over 3,000. Suddenly, my progress feels insufficient, not something to take pride in. Or the days when I don't write at all, because my kid was sick or I needed to run errands or I was just too tired. But everyone else (a different three people this time) had even more going on in their busy lives than I did and still managed to exceed their word count goals for the day. 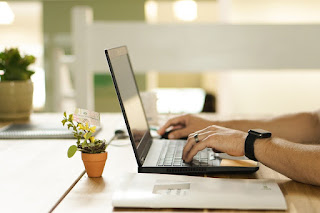 In an environment where writers are encouraged (at times to the point of pressured) to write an entire novel in one month, where readers don't want to have to wait a month, let alone a year or more, for the sequels in a series they enjoy, where sales depend on how many books an author can churn out in a short amount of time because otherwise Amazon will cause our names and products to fall off the face of the planet, I needed to reflect on this today, and I'm hoping it will be helpful to at least a few others out there, as well.

Slow and steady can *also* still win the race. Or at least finish :)

Please know that I'm not saying there's anything wrong with participating in and winning NaNoWriMo. And if you're the kind of writer who can create and release numerous quality books each year, I'm genuinely cheering you on. But that's not me. That may not be you. And that's okay.

My debut novel, Book One in my Tales of the Mystics series, was published in February, 2018. Now, a year and a half later, I'm finally getting close to finishing my first draft of Book Two. There are many reasons for that delay, which I won't get into here. But having the advice to write more and keep producing swarming around me, seeing so many authors publish multiple books while I toil away at just one, has caused this to feel like a point of shame on my journey as a writer. The whispers in my mind tell me I'm taking too long. No one will care about my book anymore if it ever even gets published. I may as well quit because I can't write fast enough to keep up.

If those same voices haunt your thoughts, tell them to take a hike! Lots of authors take years, sometimes even decades, to publish their next book. Life happens, and the reasons and process and journey looks different for each of us. I can think of several authors off the top of my head whose second or third or later book in a series is taking quite a while to reach my bookshelves. And I'm still looking forward to them! Perhaps even more so because if the author is taking the time to pull it all together well, I feel a little less worried that the series will fall apart in later books.

Most importantly, I've been reflecting on a set of e-mails I exchanged with a writer friend a few months back. She, too, was disappointed that she was completing a book years later than she'd planned. But she pointed out that she's a different person now than she was during the timeframe in which she "should've" written the book, and that without the experiences and writing practice she's had the in meantime, she couldn't have created the same book she's writing now. Think about that. The book she ended up writing is different - better - than if she'd succumbed to the pressure to write it sooner.

The same is true for the book I'm writing. And very possibly, for the book you're writing. Sometimes the pieces of a certain story won't come together until we've had additional experiences or taken a break to write other things or passed through a certain phase in life. When I reflect on the past year and a half, my life has changed in many ways, some good, some bad. I've written some pieces that fall way outside my comfort zone, like comedic flash fiction and a children's book. Now that the words of Book Two are finally flowing, they're taking the story to deeper, more complex places than I anticipated. And I don't think it's a coincidence. The second book in my series is not going to win any awards for speed or turnaround time, but I do think it's going to be a better book because of the wait.

So if you can't win NaNoWriMo, or, like me, you're too slow a writer to even consider participating, or if you ever just feel discouraged that you're not producing as quickly as the rest of the world wants you to, take heart! Without even realizing it, you're likely having experiences that will make your story richer when it's finally complete. And even if you're not or that book never gets completed, keep in mind that your growth and success along your writing journey are *not* dependent upon how many books you publish. Your worth, as a writer and as a person, is SO MUCH MORE than what you produce.

I'm going to try to do better about keeping that truth in front of me, and I hope if you struggle with similar doubts, you'll do the same!


Have you ever participated in NaNoWriMo? Do you like being surrounded by lots of writer hype, or do you sometimes fall into the comparison trap like me? Have you ever felt like one of your stories turned out better because of a delay in the writing process?