Review of The Piper's Pursuit (Katie)

Aren't books the best? They can pick you up when you're down, welcome you home when you've been away, or take you away when you've been in one place too long. I've been reading a bunch of great books over the last six weeks, and today I'm telling you about The Piper's Pursuit by Melanie Dickerson. 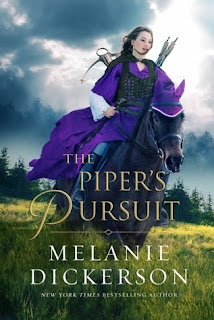 A plague of rats. Children going missing. A giant beast attacking just outside the walls of Hamlin.  And one young woman determined to save her town.

Katerina’s stepfather, Hennek, is neither a good father nor a good husband, but he is the mayor of Hamlin. Could he somehow be causing the misfortunes that have befallen her beloved town? The evidence points to a beast of unusual size—a wolf, perhaps, or a large dog—killing people who venture too far from town. But does that explain the disappearance of so many children, many of whom seem to have gone missing from inside the town walls?

Steffan knows he must reconcile with his father, the Duke of Hagenheim, but he’s not sure he’s ready. In the meantime, he roams from town to town seeking adventure and reward. When he hears of a giant beast terrorizing the town of Hamlin and an equally giant reward that includes gold, money, and the mayor’s daughter in marriage, he heads to Hamlin. Steffan plans to kill the beast, rid the town of its rat infestation, and take the reward—everything except the girl in marriage. However, when he meets Katerina, he’s not so sure. Perhaps his plans need changing.

Katerina is hunting the Beast of Hamlin for herself, determined to win liberation from her conniving and controlling stepfather. When she finds one of the children who has been missing for many months, dirty and wandering around the woods, the mystery only seems to deepen. Katerina will have to team up with Steffan, the handsome but brash duke’s son who infuriates her—he’s the only one in town who isn’t controlled by the mayor. Danger dogs them from both man and beast. Can Katerina and Steffan stop the “Pied Piper” from stealing every last child from Hamlin? Or will their interference create an even worse fate?

I've been reading and enjoying Melanie's books for several years now, and while there are some books I've liked more than others I was thrilled with The Piper's Pursuit. I thought I'd give you a few of my favorite parts.

If you want to learn more about The Piper's Pursuit you can check it out here on Goodreads. It will be available for the general public in December. However, I was given an advanced copy by the publisher. All thoughts are entirely my own.
Posted by KatieC at 4:30 AM