Remember back in May when I shared my Top 3 Man-Made Characters, with Dominic from The Electrical Menagerie at the top of my list? Here's the full review I promised! 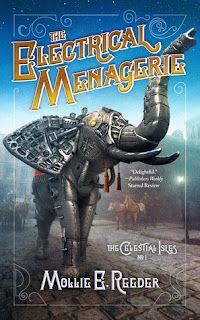 The Electrical Menagerie by Mollie E. Reeder centers around the circus-like show of Sylvester Carthage, filled with technology, illusions, and personality. But despite the show's charm, Huxley, Carthage's business manager, announces they're running out of funds to continue their tour. An opportunity to audition to perform at the Celestial Palace seems like the perfect opportunity to get more attention for the Electrical Menagerie and raise the money they need to keep the show going. But when they arrive for the auditions, the competition is tougher than they could've imagined. Worse, someone seems out to sabotage the top performers, putting them all in danger from an unknown source. As they progress in the competition, Carthage and Huxley must not only expand their creativity and showmanship to take their spectacle to new heights, they must find the courage to put a stop to the violence before it can reach the Celestial Isles' royal family.


This book was a delightful combination of fun, humor, life lessons, and all the feels. I loved the vivid descriptions of the Electrical Menagerie and other acts, which felt a bit reminiscent of The Night Circus. Carthage and Huxley were such interesting characters to get to know as more and more was revealed about their pasts and family dynamics. And as a pair, they had so many humorous interactions due to their opposing personalities and touching moments of increased understanding. The puzzle of the mysterious "accidental" deaths surrounding the competition really kept me intrigued, and I couldn't get enough of the cool world-building, especially the electricals (yay Dominic!) and the awesome trains that ran on invisible rails between floating islands.

I was fortunate enough to receive a complimentary copy of the new audiobook version of The Electrical Menagerie, and it was fabulous! The narrator absolutely brings the story to life with tons of personality and distinctive voices for each character. I think Carthage's accent was my favorite :) His engaging portrayal kept me on the edge of my seat - sometimes nervous, sometimes laughing, occasionally tearing up... For you audiobook fans out there, this one should definitely go on your list!


I would highly recommend The Electrical Menagerie for anyone who would enjoy a fun, big top-centered adventure with dynamic characters and a new world to explore. And the best news? Mollie is releasing the second book in her Celestial Isles series soon!


Have you read any books involving a circus or other show? What cool world-building have you seen lately?