I'm in something of a conundrum. I've been reading wonderful books lately and have a stack of unexpected treasures waiting for me to read and absorb their creative juices (they're middle grade fantasy--probably the most creative genre out there), but the most recent books I've finished have either already been covered on this blog (like the excellent Mark of the Raven) or are inspirational historical romance (Karen Witemyer's More Than Words Can Say). So, I decided to turn to an old friend for help. We haven't talked in a while, but I remember him as being cute and sweet.

Allow me to introduce Everard,

He is also very old fashioned, which leads to a lot of trouble but eventual happiness for this brave young prince. On his way home from the end of a centuries-long war, Prince Everard, in his excitement, kisses a peasant girl. This comes as a terrible shock to the young gentleman when he regains his calmness later at the palace. He feels duty bound to marry the girl, so he returns and proposes to her. She's not terribly thrilled at this unexpected request, and her father certainly isn't. I mean, who wants his daughter to marry a noble prince? The father tells Everard he can only marry his daughter if his completes several missions. Off poor Everard goes to face myriad dangers for the hand of a woman whose identity quickly becomes a pressing question--who is she really? What is her father hiding? Will Everard survive his missions to find out? 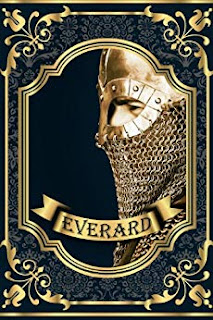 A Prince, a friend, and a lizard walk into a trap…

Everard of Havilund—fierce warrior, brave soldier, loyal friend, heir to the throne, and painfully shy.
The war is over! Or is it? After four long years fighting in a war that has spanned a millennium, Everard is finally going home. He has faced everything he fears most—he thinks. Alas, trouble is brewing in the little hamlet of Hidden Hollow and he has only himself to blame.
Follow Everard as he tries to slay the Dragon of Ironia, face the Giant of the Tripp Mountains, bring the Enchantress of Enervatia to justice… just for starters.
Will he succeed? Will he overcome his personal demons that threaten all he is working for?
Find out in this second installment of the Not-So-Fairy Tales.


Happy summer reading!
Posted by Lizzie at 4:00 AM