The Lord of Dreams by C.J. Brightley (Laurie)

If you've been following Lands Uncharted for a while, you probably already know how much I adore audiobooks from posts such as my Top 3 Audiobooks and my reviews of Dragon's Curse and Beggar Magic by H.L. Burke. So you can imagine how quickly I jumped at the chance when C.J. Brightley, an author whose work I've been wanting to read for some time, offered to give out a few free Audible codes for her book, The Lord of Dreams (thank you, C.J.!!). And I'm so glad I did! 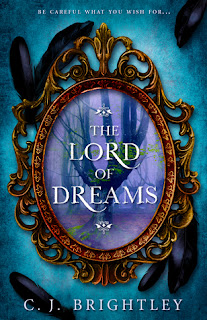 The Lord of Dreams opens with Claire on her sixteenth birthday, disappointed that her ordinary life falls so short of the adventures she dreams up. As she falls asleep, she finds herself in a dream that seems far too realistic, faced with a beautiful, terrifying man who announces himself as the villain in her tale as he fulfills her wish for an opportunity to be a hero. Tasked with the goal of saving an imprisoned fairy, Claire discovers that being a hero is far less glamorous than she'd envisioned and that her own tendencies can often be cowardly and petty rather than heroic. With the help of several new friends, Claire manages to save the fairy and return to her normal life.

Over the next few years, Claire encounters the enigmatic "villain" - the King of Faerie - on several more occasions. Then Feighli, one of the friends who helped on her original quest, shows up in her mirror with an urgent plea. In the midst of a raging war, the King of Faerie has been kidnapped and named Claire as the only one who can rescue him. Though confused why she might be able to rescue him and whether he's even worth rescuing, she agrees to help. Armed with only a butter knife, Claire ventures into the land of the Unseelie to seek the Faerie King and finds freeing him from his prison to be a simple task compared with restoring his tormented mind. Her attempt to bring him to safety and sanity blends her dreams with reality and overturns her assumptions in ways she could've never imagined.

I had seen this book likened to The Labyrinth, but otherwise I went in with very few expectations of where it would go. I'll admit at first it seemed like a girl's random adventures in Faerie, but I'm so glad I kept going because it turned into so much more! Every encounter that appeared random at first came full circle later in the story, and the world of Faerie became increasingly fun to explore. The writing was beautiful, and while I at first found the transitions between the real world and dream world a bit confusing, the narrative worked really well if I was just willing to stop thinking so hard and go with it. :) My absolute favorite part of the book was the rapport between Claire and the Faerie King - their interactions were so charged with emotion and fun to interpret, and their relationship became so much more profound than I anticipated. The ending completely satisfied my reader's heart, plus made me want to read it all over again to put all the connections together better in my mind (and to relive some favorite moments!).

If you enjoy a mingling of dreams and reality and exploring a unique vision of the Faerie world, I would highly recommend The Lord of Dreams! I also highly recommend the audiobook - the narrator had a wonderfully soothing voice and did a great job bringing the characters to life with different voices and accents. I do want to note that the main character is in her twenties for most of the book, but it was clean enough to be appropriate for teens.

What do you think? Have you read any books that take place in Faerie or take a character back and forth between dreams and real life? Do you like books that read like an imaginary romp, or do you prefer a more tangible, linear feel?