In place of my usual Writer's Life post today, we're excited to welcome Sarah Delena White back to Lands Uncharted to celebrate her latest release, Rothana, Book Two in her Star-Fae Trilogy! Sarah stopped by to give her Top 3 Faeries to Meet in Halayda when her debut novel came out, now she's sharing some thoughts on unconventional families and the importance family plays in her series. Enjoy!


What makes someone family? This is a recurring theme in the Star-Fae Trilogy. Family is very important to all of the major characters in some way or other, but it doesn’t always look conventional. None of them have living parents or siblings (at least none that figure into the story). So, what does family look like for them?

When we first met Sylvie in Halayda, she was living in a house full of fae and half-fae orphans she has taken in. Sylvie’s parents died when she was only twelve, and she never had siblings or knew any of her extended family. She knows what it’s like to be alone and vulnerable, and she doesn’t want anyone else to have to experience that. This carries over into the way she relates to Faerie as a whole. Everyone is potential family to her, because deep down everyone is a lost child in need of love (and maybe a time-out). She creates her own family everywhere she goes, and blood relation has nothing to do with it. In fact, if she ever DID find a long-lost blood relative, it would completely throw her for a loop.

Taylan, on the other hand, struggles with the concept of family because of past experiences. He barely knew his parents; they were corrupted by their own magic and then killed by the Star-Fae, leaving Taylan an orphan and a slave at age four. Centuries later, Taylan’s own son, Nikyr, was killed in an assassination attempt meant to take Taylan’s life. Since then, Taylan has kept everyone at a distance so he doesn’t endanger anyone. Now he has a wife and an auxor (cousin/comrade-in-arms relationship), and he cares deeply about them. He still has trouble involving them in the darker parts of his life, though, because he’s afraid he will corrupt them or get them killed. Writing Taylan’s gradual acceptance of love and family has been both one of the best parts of the Star-Fae Trilogy, and also one of the most infuriating (let’s just say he’s a slow learner). Fortunately, both his wife and his auxor are stubborn!

And then there are Diza and Zad. In some ways they’ve had opposite experiences with family. Diza’s parents abandoned her to die in the mortal world after her recessive shadow magic traits manifested, but she found a strange sort of family in the Lyrium. Zad, on the other hand, grew up in a close-knit pooka herd and is still good friends with many members of his extended family (some of whom we meet in Rothana), but his role as a Lyrium Pathminder has broadened his horizons far beyond his upbringing and made him feel somewhat out of place among his old herd. For Diza and Zad, their closest family is each other, but they’re also passionate about connecting with others. They both know what it’s like to feel out of place, and they love to foster friendship and community with those around them. They help bring the rest of the major characters together.

Biological family is a wonderful thing, but I’ve always been drawn to the idea of creating your own family as well. Part of it comes from experience. My extended family is small and scattered. I had no siblings for the first decade of my life, until we adopted my younger brother. I’m now in my early thirties, and marriage and kids are still nowhere in sight. But over the years, I’ve found family in unexpected places: friends, housemates, co-workers, and elsewhere. It’s unconventional, but it’s no less real, and I love showing this sort of family in my books. 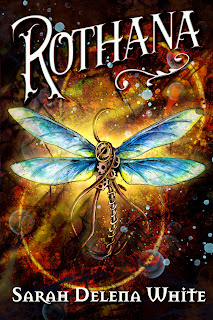 I love how the unconventional ideas of family in the Star-Fae Trilogy spring from your own experiences, and I'm looking forward to seeing how these relationships develop as the series progresses! To give a little more context to Sarah's latest book, here is the back cover blurb for Rothana:

A new queen falls. A death lord rises. An ancient foe looms in the shadows.

Sylvie Imanthiya is desperate to lead Faerie well and deepen the bond with her husband, former king Taylan Ashkalabek. But all hope of that vanishes when the winter solstice ceremony ends in disaster, stranding her and Taylan in the Deathrealm, and stripping the kingdom from her.

With Faerie in chaos, Zad and Diza are separated once again: Zad to reconcile with an old mentor to stabilize the kingdom, and Diza to confront the nefarious Casimir in the mortal realm. But Casimir claims that a greater evil seeks to destroy both realms, an evil that Diza’s unique death magic can hold at bay—if she could only remember how.

In the Deathrealm, Taylan is succumbing to the lure of specters from his past, and pushing away Sylvie’s love. Overwhelmed by decay and darkness, Sylvie must summon unexpected magic from the soul of Kyure to fight for her convictions and her husband’s heart.

Shadows divide them. Their friends are in peril. If Sylvie fails, her marriage and her world will fall.


Eeeep, I'm so excited / nervous to read this one! You can purchase Rothana on Amazon, Barnes & Noble, or as a signed paperback. Here is a little more about the author:

Sarah Delena White was raised by wolves in an alternate dimension. She writes eclectic speculative fiction that reworks mythology with a fine balance of poetry and snark. She’s an experienced world traveler who loves to weave world folklore and ancient concepts into vibrant, original story worlds. She is the administrative manager for Uncommon Universes Press. When she’s not writing, she can be found making elegant designer bead jewelry, traveling to festivals as a professional ballad singer, drinking tea, and seeking to create the perfect latte. She can be bribed with dark chocolate.

Join Uncommon Universes Press and Laura A. Grace of Unicorn Quester to celebrate the launch of Rothana by Sarah Delena White! Includes games, giveaways, exclusive behind-the-scenes, and more. Also features guest authors Bethany A. Jennings and Morgan L. Busse. Save the date to hang out with these fabulous authors! 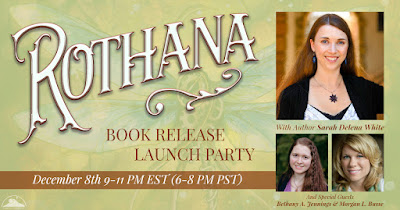 And don't miss the rest of the stops on the blog tour, which we've included below. Thank you so much for visiting, Sarah, and congratulations on your new release!