We are thrilled to welcome Michele Israel Harper to Lands Uncharted today as part of the blog tour celebrating the release of her latest novel, Kill the Beast! I can't wait to dive into this fabulous book, and I can't wait to show the you the treat Michele has prepared for us today - a look into the castles, or chateaux, of Kill the Beast! Prepare for some gorgeous, drool-worthy pictures ahead :)


Thank you from the bottom of my heart for having me on your blog today, Laurie!

I cannot wait to show you the beautiful châteaux I used for inspiration for my new book, Kill the Beast. You see, I went to Paris, France in February of 2018, and before that, I was having so much trouble writing a few of the scenes in my book.

But then I walked through le Château de Versailles and le Musée du Louvre, and scenes that had until that time laughed in my face, burst into vibrant life. I still close my eyes and give a happy sigh whenever I remember either of these lovely places.

So here, let me show you what I saw!

Le Château de Versailles is my blueprint for le Château de Champagne, the summer home of the king and queen of France. The prince is vacationing there when his parents’ ship sinks and he is cursed and turned into a massive beast. But the curse doesn’t stop at him and his château. The curse envelops all of France and twists his château into something unrecognizable—le Château des Roses Noires, or the Castle of the Black Roses. 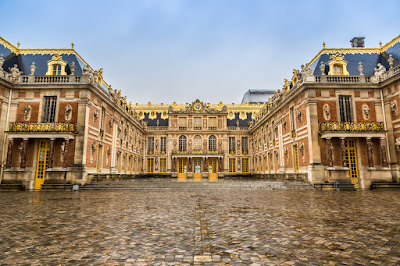 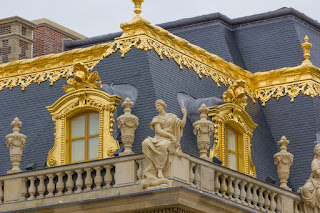 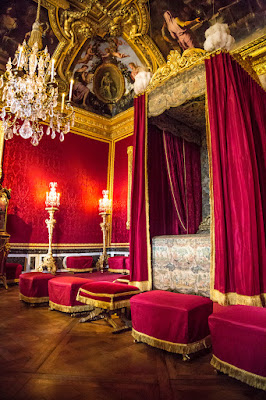 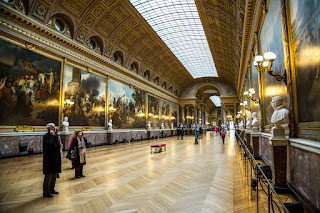 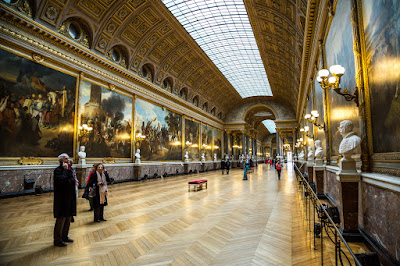 Ah, the residence of the kings while they were in Paris. Well, one of them, anyway. Wandering this massive museum and envisioning it as someone’s home was vital to my Kill the Beast story world. And although I wasn’t able to use this particular Parisian residence in Kill the Beast, I have oh so many plans for it—and the many other places I saw in Paris—in book three. 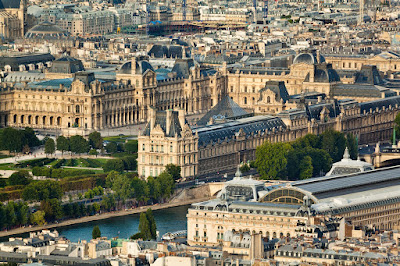 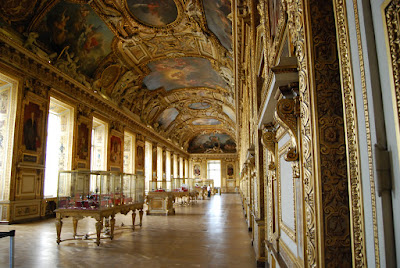 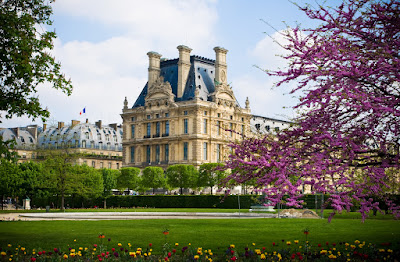 And now for a few places I love to look at online and that are on my bucket list for the next time I am in France.

Story world: When the curse fell, the well-laid out Château de Champagne twisted itself into an unrecognizable château—one that had not been there before—called le Château des Roses Noires, the Castle of the Black Roses. A cursed château.

My view: Although Bretesche is much smaller and the stone is not black as the beast’s château, this is the château that is on Kill the Beast’s cover and that fired my imagination of how I wanted the other château to look, though completely wrapped around an inner courtyard. I simply must visit here one day! 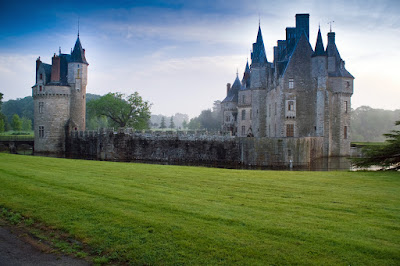 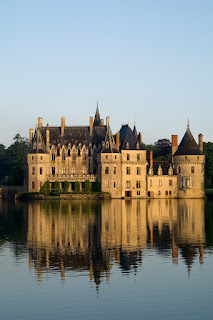 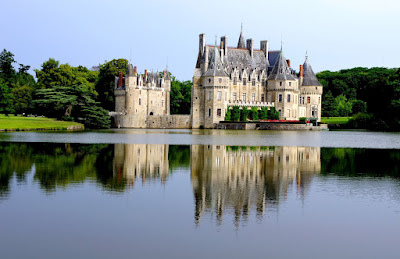 This cottage on the property of la Domaine de la Bretesche is what I envision Ro’s family’s wealthy cottage to look like, before they were forced to move. Big enough to have servants galore and no sharing rooms—this home is sorely missed! 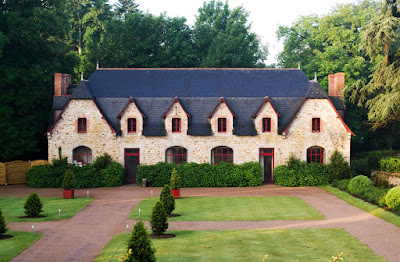 After living in luxury, the squalor of the cottage in the little village of Champagne is more than Ro’s sisters can bear. Well, all except Cosette, of course. She bears it with the patience of a patron saint. All seven girls share one room, Claude and Pascal another, and who knows what their père does in his study—if he even bothers to show up at all. He hasn’t been quite the same since his wife died and his merchant vessels sank and the curse fell—fifteen years ago. And where they live shows it. 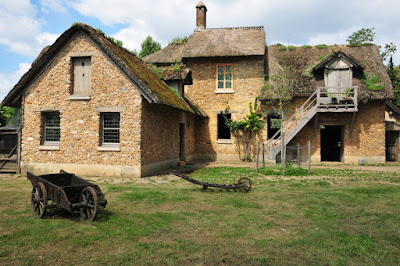 This city hall in Reims, France is what I envision Gautier’s small château to look like. After all, he is waiting—and waiting and waiting—at Reims for the curse to be lifted so he can be crowned king. And although this steward has his eye on the king’s palais in Paris, the much smaller and much less grand château will have to do. For now. 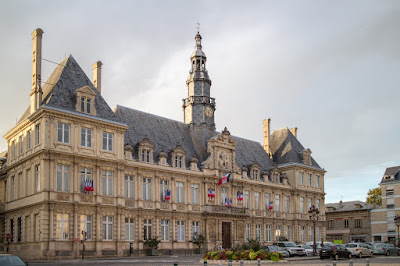 This is where the kings of France were crowned for hundreds of years. (Not to be confused with Notre Dame in Paris.) One of the other reasons Gautier wants the beast killed so badly is, no matter how many times he has been through the crowning ceremony, no one remembers that he is trying to crown himself king. A nice little part of the counter-curse from the Queen of the Fairies. Gautier is not amused. 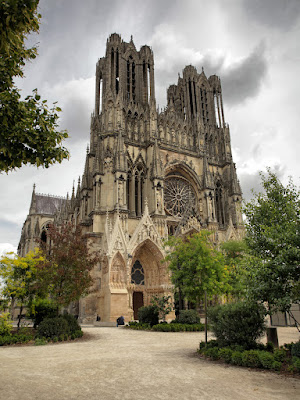 *All images are purchased stock images from DepositPhotos.com and are approved for editorial use


Thank you so much for sharing these, Michele - I'm more excited than ever to read your book!! Here's a little more about the author:

Michele Israel Harper spends her days as a work-at-home mom and her nights typing away furiously on her laptop. Sleep? Sometimes… She has her Bachelor of Arts in history, is slightly obsessed with all things French—including Jeanne d’Arc and La Belle et la Bête— and loves curling up with a good book more than just about anything else. Author of Wisdom & Folly: Sisters, Zombie Takeover, Beast Hunter, and Kill the Beast, Michele prays her involvement in writing, editing, and publishing will touch many lives in the years to come. Visit www.MicheleIsraelHarper.com to learn more about her. You can also connect with Michele on Instagram, Facebook, Twitter, Pinterest, Google+, Goodreads, and Amazon.


And now, a little more about Kill the Beast :) It doesn't release until September 25th, but you can go here to pre-order now! Here's the back cover blurb:

Ro remembers the castle before. Before the gates closed. Before silence overtook the kingdom. Before the castle disappeared. Now it shimmers to life one night a year, seen by her alone.

Once a lady, now a huntress, Ro does what it takes to survive—just like the rest of the kingdom plunged into despair never before known. But a beast has overtaken the castle. A beast that killed the prince and holds the castle and kingdom captive in his cruel power. A beast Ro has been hired to kill. Thankful the mystery of the prince’s disappearance has been solved, furious the magical creature has killed her hero, Ro eagerly accepts the job to end him. But things are not as they seem.


Thanks again for joining us today, Michele, and congratulations on your new release! Make sure to stop by the Facebook party celebrating Kill the Beast on Thursday, September 27th, and check out the rest of the blog tour stops below!

Wednesday, Sept. 26th, “Review of Kill the Beast: Why I Identify with the Beast,” Cathrine Bonham, www.cobonham.com