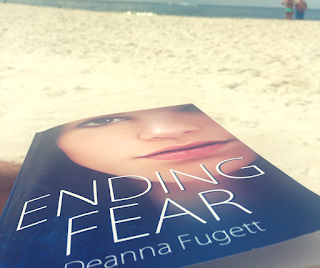 As readers, we each have our own preferences. There are subjects we naturally gravitate towards and others we avoid. For me, I generally avoid books that include abuse as part of the storyline. However, after running into Ending Fear at every turn, a book I might have otherwise avoided, I stepped out in faith to read it and was pleasantly rewarded.

Ending Fear by Deanna Fugett features a refreshing approach to including the subject of abuse in a fiction story, leaving the reader with a sense of hope and empowerment.

Fourteen-year-old Fear seeks to escape her abusive adoptive family and build a new life with a new family. Humble prose reveal only the necessary details of Fear’s abuse with a gentle authenticity wrapped in faith and love. Along the way, Fear discovers the path of faith in her future dystopian world where people are taught there are no moral absolutes.

Ending Fear is also a finalist for a Realm Makers Award.

From the Back Cover

Fourteen-year-old Fear learns she was a parachute baby, dumped over the edge of the Gliding Lands as an infant. Fascinated by the floating cities in the sky before, now she’s desperate for answers.

But a slave isn’t likely to get those answers.


When her abusive Downer family throws her from their hovel, Fear takes refuge with a family who shows her love for the first time. Surely they can’t be trusted. Years of abuse and molestation has taught her that.

Then her brother discovers where she’s hiding and tries to kidnap her. Fear will never let him touch her again. Her new family conceals her at the Fallen, a ranch that hides parachute babies from the Uppers who discarded them.

Just as she’s beginning to embrace yet another home, Fear’s new little sister, Happy, is kidnapped and taken to the Uppers’ temple harem. Fear must go against her namesake, find a working hoverpod, and journey to the dreaded Gliding Lands before the little girl’s innocence is ripped from her forever.

Can she save Happy in time?

And will she find answers to the burning question of why anyone would throw her away?
Posted by K.A. Cummins at 4:00 AM