The Shock of Night by Patrick Carr (Lizzie)

As a fan of fantasy author Patrick Carr's The Sword and the Staff trilogy (starting with A Cast of Stones), I was eagerly waiting for his next series, The Darkwater Saga, which begins with The Shock of Night. It did not disappoint. :) 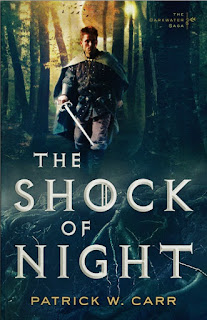 Set in a medieval world, The Shock of Night is an action-packed murder mystery with fantasy elements. The fantasy aspect is mild, mostly present in the form of gifts that, when combined with natural talent and the right temperament, give almost super-human abilities. There's also a mysterious forest housing some unknown evil.

The main character, Willet Dura, is reeve to the king of Bunard and is called upon to solve the murder of a priest and the priest's guard. The priest, who survives just long enough to be carried to the House of Passing, grabs Willet, screams at him in a strange language, and then dies. Willet soon discovers that he has much more than a simply murder on his hands--when he touches someone, he sees into their thoughts and memories. The dying priest passed a rare gift to him, a gift that's not supposed to exist.

Nonetheless, it sounds like the perfect gift for a reeve--no criminal would go unpunished and no innocent falsely condemned--but Willet quickly realizes the gift is just as dangerous as the murderer on the loose. And they're connected. Only members of a secret and specially trained group known as the Vigil possess this mind-reading-by-touch gift, and they aren't happy when Willet receives the gift instead of the man they had trained to inherit it. When they try to take over the search for the killers, Willet finds himself in as much danger from them as from the murderers.

Yet both Willet and the Vigil soon realize there's a greater threat. The evil hidden in the deadly Darkwater Forest is creeping out. The Forest is a place no ones survives, or survives without becoming violently insane. No one, that is, except Willet Dura, and he doesn't remember what happened to him there, and not even the mind-reading Vigil can tell him. The murders, the gift, the Forest and Willet's experience there, are all tied up in a conflict that could destroy Willet's beloved city and spread from there like a disease. Willet will need all his intelligence, wit, and bravery--and unlikely friends--to have any chance of saving the city.

I was initially surprised by the differences between this book and Carr's others. The Sword and the Staff was written in third person and was a bit more Tolkien-esque with the main characters having to travel and save the kingdom. The Shock of Night focuses on one city and begins in first person POV with Willet Dura but then switches to third person for Pellin's chapters (Pellin is the head of the Vigil). I was surprised by this, but it soon became apparent why this was. It's essential that we are in Willet Dura's mind and seeing what he sees,  no more, no less, but that we also have the most distant perspective of Pellin.

As with The Sword and the Staff, the characters are likable and have depth. I particularly love witty, kind-hearted but tough, troubled Willet; his fatherly, Vigil-assigned guard Bolt; wise King Laeder; and the street urchins Willet's always giving his money too. Carr also does a phenomenal job of keeping up the tension, revealing one shock or plot twist after another. I want to tell you a few of them, but I can't! I don't want to spoil the surprise for you when you figure them out for yourself!

With action, mystery, well-done fantasy elements, a touch of romance, and excellently drawn characters, The Shock of Night is staying on my shelf of favorites. I am looking forward to reading its sequel, The Shattered Vigil.

The novella prequel, By Divine Right, is also a great read and is available as a free ebook on amazon. 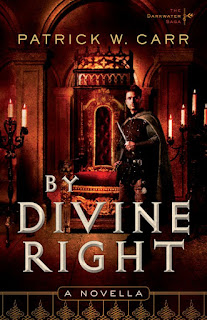