Have you ever seen or played the game Minecraft? If you haven’t, it is a game that is based around the idea that you, the player, can take the materials that make up the world and either rearrange them or repurpose them in order to build things. I brought Reni into Minecraft for her first out-of-story adventure so far. I’ll let her share her experiences with you.

Reni: Hooray! You didn’t wait until the end to let me talk!


A Visit to Two Cities


The first city I visited was called Aula. 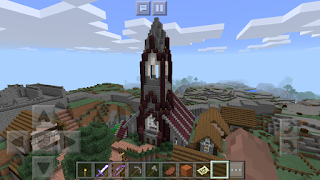 One of my favorite buildings there was this church, which Hannah built out of stone bricks and nether bricks. 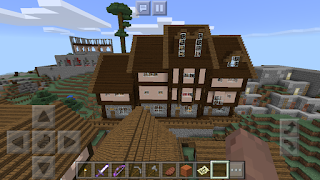 This university had a bit of a different style since it was made out of white stained clay, spruce wood, and dark oak wood. 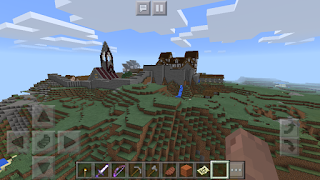 Aula is situated high above much of the surrounding landscape in a biome called “extreme hills.” (Why they didn’t just call it “mountains” I don’t understand…) Anyway, the extreme hills biome is made up of a grassy, hill-covered expanse with few trees but a large supply of stone under the dirt. Most buildings in Aula were made of stone and clay and had wooden roofs.  There was a lot of clay close by in a deep river. Wood could be found in a nearby forest, but it wasn’t as easy to get as it would have been if the city had been in a forest biome. 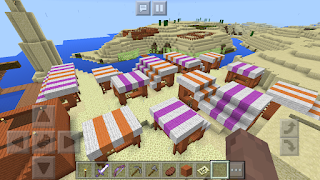 The other city I visited was called Khatira. It’s not finished yet, but as you can see, it is in a desert. 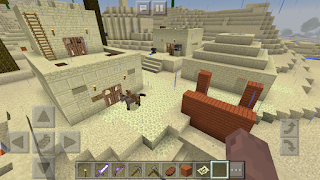 Big difference, huh? Instead of stone, clay, and wood, nearly everything is made of sandstone. The little acacia wood Hannah used was hauled in from a distant savannah using a donkey caravan. She raises cows and sheep there because in the desert, there isn’t dirt for raising crops. Since it is a coastal city, fishing is the main source of food. 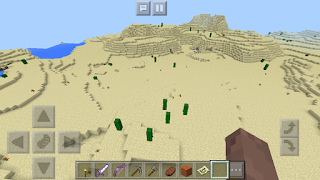 See? A whole lot of sand, sandstone, cactus, and not much else. 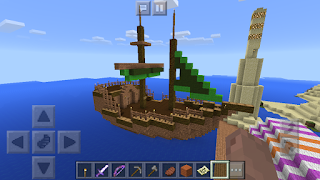 Thankfully for Khatira, it isn’t completely isolated. It is a port city, and here is a ship in the harbor that is made of jungle wood. It is importing cocoa beans, jungle wood, vines, and other goods that you can’t find in either extreme hills or the desert.

Hannah: Thank you, Reni. I’ll take it from here.

Reni: What? But I just started!

Hannah: I know, but like I said last time, I’m easing you in.

Reni: That’s dirty! Just you wait, one of these days, you won’t be able to get rid of me so easily…

The purpose of this was to illustrate how something as simple as a building can change dramatically when the available resources are different. When you start to think about the economy, things get even trickier: coal is very expensive in my desert city, but it is dirt cheap in the one on the hill. How does this change the way the city functions when coal is an essential resource for smelting metal, providing light, and cooking food?

That is why, in Minecraft, it is important to choose carefully where you are going to build. What resources are essential, and how are you going to ensure you can access them? Anything can be imported, but is it worth spending the half hour it requires to travel to a faraway forest, chop the trees there, and haul it all back? Or would you rather have that forest in your backyard? What about stone, water, food, or high ground? Do you want to build next to a natural village so you can trade with the people there, or would you rather look for one of the dangerous, abandoned ruins that yield large amounts of treasure? There are many factors involved in choosing a location. While some people will simply build wherever they are, it is important to consider the effects the landscape will have on your lifestyle.

Stories are the same way. You could “write what you know” or write what seems interesting, but if you want your world to be well developed and consistent, it would be a good idea to consider some of the questions I listed above. Minecraft is a simplified version. You can grow trees in the desert if you move dirt there. You can raise animals with no water, or live in perpetual snow with no heat source. Real life doesn’t work that way.

Do you know what biome your characters inhabit? It’s an important choice. If they lack a critical resource, they are going to have to find a way to acquire it or learn to cope without it.

For example, in my current story, the main characters live underground. Obviously, this is not a real world biome, but it does exist in my story. I have run into many problems: where do they get food? Plants don’t survive without sunlight, so my characters have virtually no crops of any sort. Speaking of plants, they don’t have trees either. They build buildings out of stone, but what about doors? Stone would make a heavy door. Metal has to suffice instead. No large mammalian creatures live underground, and cotton is a plant. What do they wear? How do they get around if they have to dig tunnels everywhere? Since they can dig tunnels up and down, they obviously don’t have to live in two dimensions anymore. What happens when two nations go to war? If they have to fight in tunnels, how does that change what armor and weapons they use?

Reni: Hannah, not everyone has a biome as strange as yours.

What should you look out for, then?

Resources that are important to most or all earth civilizations:


Your civilization is most likely going to need all of these things. However, as Reni showed with her Minecraft examples above, different cultures meet these basic needs in many different ways. This is why biome is important.


In Japan, only 12% of the country is suitable for growing crops. However, seafood is abundant. In contrast, the Midwestern United States has a large supply of grains – wheat, corn, soybeans, and wild rice – and also beef and pork. Seafood is rare there because it is completely landlocked.

This is where research will benefit you a lot. If your climate is similar to a particular place on earth, it would be quite beneficial to see what sort of plants and animals live there. An ecosystem is “a biological community of interacting organisms and their physical environment.” This is exactly what you need to create. Thankfully, it is not difficult to research a biome similar to yours in order to figure out what kinds of wildlife would be available. Once you have that information, you will have a good idea what your characters will be eating.

Of course, the globalization of the food market has helped standardize the foods available. Nevertheless, even if your story is set in modern or future times, there is a good chance the cultural and regional food tastes were set long before they had access to foreign cuisine.

Here are some food-related questions to consider.

Note: If food is not very important to your story, you most certainly do not have to go into all this detail. I haven’t yet. Still, it wouldn’t be a bad idea to go over the main ideas.


Food isn’t the only cultural element affected by the choice of location. The available building materials dictate what can be used to build shelter, and the climate determines what types of shelter will be necessary. For example, when the Vikings settled in Iceland, only 30% of the island was forested – and this was mainly birch. Oak was the preferred wood, but the Vikings used what they had. The front and back walls of the buildings would be made of wood, but the roofs would extend all the way to the ground and were covered in turf. This way, the Vikings made use of an abundant resource – turf – and took advantage of the extra insulation it provided. If you look at architecture all across the world, it shouldn’t be difficult to see how the biome directly influenced the buildings.

Note: There are many other elements that will affect buildings. For example, which buildings are the most important to a society? How are they distinguished? What features are stylish at the time? Etc. However, for now I am specifically focusing on biome-related considerations.


Like food and shelter, clothing is an important part of culture. Many people associate silk with China or grass skirts and leis with Hawaii. Clothing can be just as distinctive as food or a building, and it too is largely dictated by available resources. Common materials include but are not limited to wool, cotton, fur, leather, linen, silk, polyester, and more.

Also, like buildings, clothing must be appropriate to the temperature. Fur was widely used in Canada and northern Europe because the indigenous animals had warm fur to protect them from the bitter cold. The people would hunt these animals specifically to benefit from the same protective furs. In contrast, people in Greece and Rome, in the warm Mediterranean climate, wore thin, loose linen garments so they didn’t get too hot.

Clothing is also protective. Knights in Medieval times wore armor into battle, my dad wears a windproof jacket when he rides his motorcycle, and construction workers wear hard hats. Firemen wear fire-resistant jackets, divers wear scuba gear, and I wear rubber boots when I have to work outside and the ground is flooded. No matter what you are doing, chances are you will probably wear something that will keep you comfortable and safe. Over time, people will find ways to make it easier to interact with their environment, so it would be a good idea to consider what technology your civilization may have developed to deal with some unwanted elements of their biome.


Next time, I will look at the broader social and economic effects of resources – Which ones are the most rare and valuable? What happens when one country relies on another to provide a critical resource? How do population centers grow around a large supply of an important resource? – But for now, consider how the environment dictates culture on an everyday scale.

If you are interested in more information, check out Day 8: Economy and Politics from 30 Days of Worldbuilding.

Thanks for reading! As always, questions, comments, opinions, and ideas are always welcome in the comments. Have you ever thought about how much a society is built around the resources available? What are some of the most interesting real-world cultures to you?
Posted by Unknown at 4:00 AM