The Blood of Kings trilogy is an epic medieval fantasy tale about Achan Cham, a young man who is a slave, and Vrell Sparrow, a young noblewoman disguised as a boy to avoid a forced marriage. They discover their ability to speak to and hear the minds of others, which is called bloodvoicing, as they battle back the darkness covering half the land of Er’Rets. 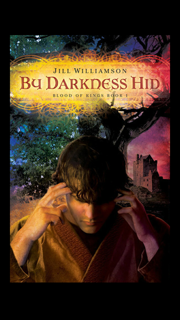 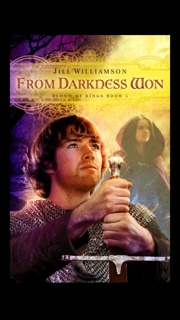 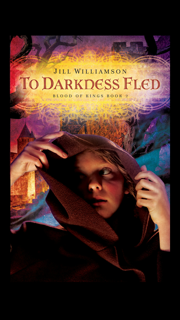 After reading about this book in snippets from The First 50 Pages by Jeff Gerke and Storyworld First by Jill Williamson, I knew I had to check it out. Just the concept of bloodvoicing was intriguing. The world is vividly three-dimensional, from its history of the murdered king and queen to the half dead tree in the middle of the land to the Cham, a fire-breathing bear.
Even when he’s nothing more than an abused slave, Achan is noble and honorable, protecting those weaker than himself. His heart is pure and his compassion is astounding. Though he makes several terrible mistakes, giving us a glimpse of his darker side, he never fails to return to Arman, the One God.
Vrell is 17, and her plight caught my interest right away. What would it be like to have to disguise yourself as a 14 year-old boy in order to avoid a miserable marriage? Her situation becomes increasingly precarious and interesting as she eventually joins Achan in his journey. Achan thinks she’s a weakling (since he’s under the impression that she is a he) and sees it as his responsibility to teach her how to fight and wrestle.
Eventually—much to my elation—their relationship does take a turn for the romantic. The romance is most prominent in the second book, but throughout the story, it’s often a huge source of motivation for the two of them, but the book is predominantly a medieval fantasy adventure. Though the romance is present, we don’t see enough of it, in my humble opinion ;) In case you can’t tell, I totally ship them!

Overall, I thoroughly enjoyed this book and seeing both of the characters grow over the course of the story. It has some wonderful examples of God (or Arman) and His love. (Note: The first book, By Darkness Hid, is free on Kindle!)

Do you like a thread of romance in a story? What are some of your favorite medieval fantasy epics?