Today I am thrilled to welcome J.M. Hackman to Lands Uncharted! Like all of us who are a part of this blog, she is an aspiring author of YA fantasy (and I'm going to have a chance to meet her at a conference next month!). J.M. took the time to answer some questions for us about herself and her writing:


Tell us a little bit about yourself.

I’m a forty-something wife, mother of two beautiful girls, and a writer of speculative fiction. With the exception of my first year of life, I’ve called Pennsylvania home and most of it has been spent in the same small town [begins humming John Cougar Mellencamp’s Small Town]. I graduated from Penn State with a degree in Elementary Education. After five years of dating (most of it long-distance), my boyfriend and I married. This year we’ll celebrate our 21st wedding anniversary! 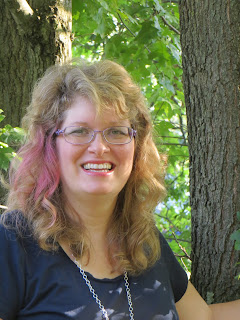 Many moons ago (AKA before children), I wrote Christian romance, but felt hemmed in by what could and couldn’t be said. The “voices in my head” fell silent when I became pregnant—apparently, the hormones running amok had taken over all thought processes. After my first daughter was born, I designed and sold jewelry at local art fairs. But after the birth of my second daughter, I came back to my first love, writing. This time, I fell in love with speculative fiction.

I’ve always written—book reports and short stories in elementary school; articles and (bad) poetry in high school; Post-its (I should buy stock in 3M!), essays, and novels when I became an adult. The only exception was when I had children (as mentioned above). That quiet period was a sad time for me. I assumed my story-telling days were over and God had something else in mind.

There are so many! Sarah Addison Allen does a fantastic job of introducing magic in ordinary stories. Her Garden Spells is a favorite. J.K. Rowling, C.S. Lewis, and J.R.R. Tolkien inspired me to use my creativity and try my hand at speculative fiction. And Rick Riordan taught me to introduce humor into an adventure story, especially through protagonists’ sarcastic snark.

Aside from my own characters which I obviously relate to because there’s a lot of “me” in them, I really related to Meg from A Wrinkle in Time. When I first read the book, Meg and I were the same age, and she was bookish, awkward, and not very popular (like me). Madeline L’Engle also introduced me to such an enormous, unboxed God in that series. It changed my viewpoint forever.

Italy. It is a romantic, yet old, country with beautiful architecture and delicious food!

For a while, I sucked down massive quantities of Diet Coke and M&M’s, both of which are unbelievably bad for me. So I adjusted. Now, I drink lots of water, tea (both hot and iced), and dark chocolate chips (Ghirardelli brand). The chocolate chips are non-negotiable.

Less is more—in everything. Trust your reader to understand the point you’re trying to make without beating them over the head with it. Use fewer, yet more descriptive, words to tell your story.


What inspires you to write YA fantasy?

One: The chance to world-build with unlimited creativity.

Two: The way speculative fiction lends itself so beautifully to sharing a message of dark vs. light.

Three: The opportunity to ask “What if . . .?” The fantasy genre gives me a lot of room for all my weird wonderings. (Don’t check my internet search history!)


Can you give us any insights into your work-in-progress?

After reading Tolkien, Lewis, and Rowling, I thought: Where are the female characters?!? I wrote The Firebrand: Spark (the first in a series) in response. Fifteen-year-old Brenna James is a tough, snarky, heroine with an awesome emerging gift—one she has no idea how to use. Due to her ADHD, she’s accustomed to being the airhead who daydreams through life. But now with her mother missing, she’s required to learn to control her gift of fire-starting and find her mother and her place in a new alternity (alternate reality).

Spark initially began as a story for my oldest—why girls are valuable for who they are, not what they look like. When my youngest was diagnosed with ADHD, the story became a tale of a square peg who didn’t fit into a round hole. Nevertheless, she accomplishes great things because she’s unique and valuable. As C. S. Lewis said, “There are no ordinary people.”

I’m a voracious reader, and I’ve read some fantastic series. While I love Lewis, Tolkien, L’Engle and Rowling, here are my favorite Top 3 series in descending order.

3. The Underland Chronicles, by Suzanne Collins. Before she wrote The Hunger Games trilogy, Ms. Collins wrote Gregor the Overlander. It’s a terrific first book in a series about a boy named Gregor that gets caught in a subterranean world when his baby sister falls down a grate in their New York City apartment. There are giant rats, enormous bats, huge bugs, and a war’s brewing. Although the cover didn’t pull me in, the story did. I was raising a toddler at the time, and Gregor’s adventures with his baby sister were very relatable!

2. The Lunar Chronicles, by Marissa Meyer. Cinder is the first book in this excellent series and my favorite heroine. I found myself “fangirling” when she showed up in the other stories. Although these are fairy tale retellings, they’re written with a sci-fi spin. The series has strong heroines and heroes, as well as intrigue, political maneuverings, and a psychotic villain, who you love to hate. Despite the happy ending, I sulked for a day or two after I finished.

1. The Hagenheim/Fairy Tale Romance series, by Melanie Dickerson. These fairy tale retellings are gold. Dickerson’s fantastic tales, full of fair maidens and noble heroes, are sewn together into beautiful Christian love stories. I’m reading through the complete series this summer with my teen-aged daughter. (The first book is The Healer’s Apprentice, a Sleeping Beauty retelling.)


Thank you so much for visiting, J.M.! Your literary tastes are very similar to those of us blogging here at Lands Uncharted :)  We can't wait to read Spark someday!