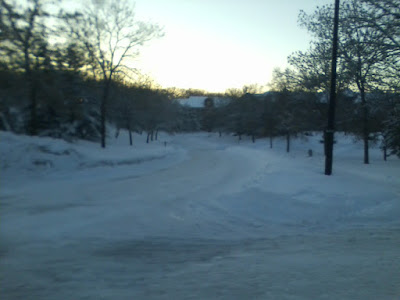 When I was growing up, winters were always safe, even warm. I know I was lucky. They meant cutting down Christmas trees, sledding down the deck stairs (and sometimes more conventional hills), coming in to hot cocoa and a fireplace, and baking cookies with my mom in her cozy kitchen that had blue ducks all over the walls. They meant holiday snack nights and gift shopping and dinners with my family. And on holiday break from school, I would accidentally wake up at 6 a.m., and read in bed to the sun coming up over the new snow.

I didn’t realize until I spent ten years away from snow that it has a different smell at night. Maybe it was my imagination, but that smell brought memories strong enough to cripple. Most importantly, that first winter back brought adventure. Minneapolis was up there with record snow falls that year, in 2010. I had not yet discovered truly proper winter clothing or decent tires, and I wondered how people survived there. I had never driven in snow, and I was regularly driving home from the bus station in anywhere from four- to twenty-inch snow storms and blizzard conditions. One morning, my car didn’t work, so I thought I would hike thirty minutes to the station in my thin dress pants. I was an icicle by the time I got on the bus, with the sun just coming up over the horizon, and learned only after arriving at work that the temperature was zero. Now I at least know to check the forecast every day. And invest in long johns.

The first manuscript I had written, back in college, was about winter, and it was like it had come to life for me. Like it knew me, and was standing up in greeting. That year also brought holiday songs, quiet in the air, crunching beneath my boots, and sunlight on snow that touched me as only my lovely memories could, bringing two worlds together in a bittersweet way. It made a difficult time seem magical somehow because it inspired me to keep writing and eventually find a sense of fulfillment in myself I had been missing. By the first of May, 2011, there were still flurries in the air, but I was on my way to my first children’s literature conference to hear my favorite editor speak. That was my first experience with the Loft Literary Center in Minneapolis, and I have never been the same since. I fell in love that year. And there’s nothing like falling in love, whether with a person or a place, to remind you things work out on their own, despite best-laid plans.

Is any particular season especially meaningful to you, and how has it changed as you’ve grown? Have you ever experienced a difficult adjustment in your life that turned out to be positive?

Laura
Posted by Unknown at 4:00 AM