I hope all is well with you and yours! As I type, I'm enjoying a much-needed rain, the third-ish in a chain that recently broke a months-long drought with consistently record highs. Most of the trees, bushes, and grasses have been dry brown for most of the summer. Now, thanks to three days of afternoon showers, they have green tops! It's kind-of bizarre. Needless to say, I have avoided the scorching dryness by staying inside my air-conditioned home and reading. My most recently discovered treasure is this weekend's recommended reading: The Demon King (Seven Realms Book One) by Cinda Williams Chima. 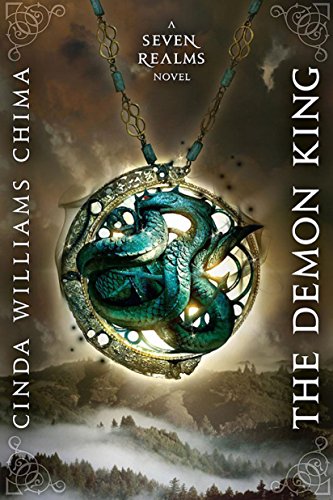 Within the Seven Realms, the Queendom of the Fells is divided between the wizards, the Spirit Clans, and the Fellisians. Each group has scorned and despised the others for over a century, since the Breaking. Antagonized by the economic and political strains that accompany the civil war in other realms, tempers in the Queendom flare among the groups, ratcheting tensions to the breaking point. Raisa ana'Marianna, daughter of the clans and thirty-seventh descendant of the warrior queen Hanalea, longs to unify the peoples of the Queendom, but all of her efforts are blocked by Lord Gavan Bayar, the High Wizard of the Wizard Council who seems to be scandalously more than her mother the Queen's advisor.

Han Allister is a reformed Streetlord known for his silver cuffs, wide bracelets worth a fortune if he could only remove them. In order to stay off the streets, Han spends most of his time among the Spirit Clans, hunting for game and herbs he can sell in the Fells. It's a modest living, but it works well enough until wizards come to the Clan's lands, where they are forbidden. Han's encounter with Micah Bayar, son of the most powerful wizard in the Queendom, incites a series of events that go from bad to worse and cause Han to wonder if he wouldn't have been better off on the streets.

The Demon King is the first book in a four book series that is a refreshingly different story about trust and love in the face of insurmountable odds. This series takes place in an original cultural setting that blends the usual medieval trappings with tribal elements of cultures like the Indigenous Americans. Raisa is a strong female lead who is unique in her lack of reactivity. Instead of believing what she's told and reacting to unfounded revelations, she consistently insists that accusers provide evidence for their claims and only proceeds when she knows the facts of a situation, which I found very satisfying. The story is also masterfully woven across the entire series. I normally take small breaks between the books in a series, but I devoured all four of these books back-to-back. You will, too, so make sure you have all four books before you start.

Until next time, happy reading!