Spring into March with a charming fairytale retelling! Kingdom of Dance by Deborah Grace White retells  The Twelve Dancing Princesses and finishes up her series, The Kingdom Tales. This tale of a princess, a reluctant soldier mage, and dragons make for perfect weekend reading!

Kingdom of Dance: A Retelling of the Twelve Dancing Princesses (The Kingdom Tales Book 6) 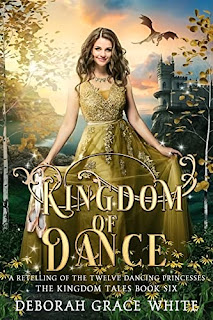 My Rating - 4.5 Stars
This was a fun and charming spin on the classic fairytale, The Twelve Dancing Princesses! Zinnia, the eldest princess (and sister to the new king who we were introduced to in book four, Kingdom of Feathers), stumbles into trouble one night when she follows a dragon. Unfortunately, her eleven younger sisters tagged along and were swept up into the curse as well. A year and a half later, her brother has been alerted to something being not quite right with his younger sisters by their destroyed dancing slippers. Which is where our reluctant mage comes into play.
I really enjoyed this take on the Twelve Dancing Princesses. While many of the signature elements of the original fairytale were kept, White does a great job of twisting when, where, and how they show up. I particularly enjoyed the twist with trees of silver, gold, and diamond. Obsidian is a such a fun conflicted hero who must learn to accept his own magic before he can succeed in his new mission - saving Zinnia and helping her save their entire continent.
I liked Zinnia's own conflicting feelings about her place as princess and bearing the burden of her very large family. I also loved her courage in the face of hardship and unexpected challenges. Silencing curses are very effective but they won't keep this princess from doing her best to stop the schemes of an evil dragon.
My favorite thing about this story was the ending. It was totally and completely worth the slow buildup over the series with all the little hints about what is truly going on with the continent of Solstice. Not to mention the sudden rash of curses plaguing the royal families. It ended on a high note and a happy ending but also left room for us to wonder if we might see a familiar face or two in a future series.
I've enjoyed all six books in this series. They're full of adventure, dragons whose superior senses miss human manners at times, and clean romance fit for the whole family. White's next series is all about mermaids and I cannot wait to see what she has in store with that one! In the meantime, I recommend Kingdom of Dance and its series for anyone who loves a good fairytale retelling. The books are technically standalone but the overarching series arc is best appreciated when read in order.
Happy Reading!
Kimberly