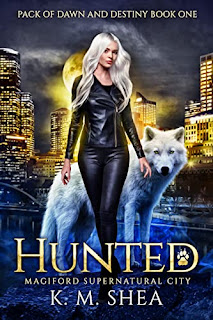 Phillipa (Pip) Sabre was born a hunter, which is a supernatural species of human that has special magical attributes. Pip’s magic manifests in speed, quick healing, invulnerability to most contagions, and the ability to detect the position and approach of any werewolf (to name a few). Through an accident that killed both of her parents while she was still young, Pip needed a home. Her adoption by two werewolves brought her into the pack, but despite their acceptance, she didn’t feel like one of them.

Her lack of fur is only the beginning of the differences. In spite of them, though, she loves her pack and takes part in pack life to the best of her ability. It is a good life despite the aggressive cuddling sessions and the fact none of the males see her as anything other than a puppy thanks to her special Hunter pheromones.

However, when her pack is attacked and framed when wolves in surrounding packs go feral, she is ready to work on the problem with the pack although the process puts her in frequent interaction with the pack alpha, Greyson. He is the one pack member she wishes most to avoid. First, he is annoying, and second, she objects to how he came into power, resulting in the leaving of the previous alpha and his family.

If you like werewolves that break the mold with healthy pack dynamics, respectful relationships, fun interactions, and no bullying, this series is perfect for you. Shea delivers with humor, warm relationships, gentle romance, and the perfect mix of fun and intrigue. I can’t wait to read the next book in the series, United!