Pet lives alone in the house where her parents were murdered.

Of course, “Pet” is not her real name. It’s more of a job title, really. But when the knowledge of someone’s real name can grant power over that person, it’s better to keep that name to yourself. Especially when dealing with arrogant fey, eternally adolescent vampires, and the other denizens of the realms Behind and Between.

Four years after her parents were killed, Pet discovers another body hanging, horribly mutilated, outside her bedroom window. While she tries to avoid discovery inside her house, two fey and a vampire begin investigating the murder outside. This leads to them buying Pet’s house without knowing that she still lives inside and is exactly how she becomes the human pet of three other-worldly detectives. 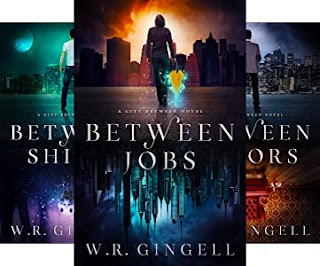 Greetings and happy New Year’s Eve! I’m not one for resolutions -- I try to make improvements on an as-needed basis and for me they are, alas, regularly needed. However, I can agree that one thing I resolve to do every year is read good books. So, as we celebrate another transition from old to new, I’m thrilled to recommend that your first read for the new year be The City Between Series by W. R. Gingell. This series is a collection of urban fantasy detective stories set in Australia. The entire series consists of ten novels and two novellas that tell the story of a snarky mostly eighteen-year-old who is thrust into the politics of the worlds Behind and Between as she tries to make sense of and resolve the murders of her parents. You don’t have to read the companion novellas in order to understand the books that follow them, but I recommend that you do because the events that occur in them are referenced frequently in the subsequent stories. (Read Cloudy With a Chance of Dropbears after Book 5 and read All the Different Shades of Blue after Book 6.)

These stories drew me in because Pet is so delightfully snarky. She is also relatable in many ways, and, while naive about much, she is very capable. Her interactions with the other characters in the series are witty and droll enough that I laughed out loud several times. While the series is extensive, the story lines are masterfully woven together at a pace that kept me engaged throughout the series. I even thought I’d take a bit of a break between the books so that I didn’t become bored, but I found myself jumping into them one right after the other, instead.

If you enjoy paranormal / urban fantasy with a hint of mystery and a bit of snark, then I highly recommend you begin your reading for 2022 here. I’d also love to hear your new year reading recommendations, along with other questions, observations, and remarks about all things related or relatable to Lands Uncharted, in the comments below.

As ever, it has been a delight to be among the authors who blog here. We hope you have a wonderful 2022 filled with grace, love, and peace. From all of us here to all of you, happy reading!