What if superhumans weren’t considered heroes?

When Scarlett Marley is attacked by an illegal super with fire powers, she doesn’t get burned, but now she has a fire-like glow flickering in her eyes.

With superpowers criminalized, she has no choice but to turn herself over to the Superhuman Containment Facility, or risk hurting everyone she loves.

Her normal life seems lost forever, until she is selected to be one of the first to receive the experimental cure to destroy her powers. In exchange, she must first complete one mission:

Infiltrate and capture one of the largest gangs of supers in the remains of once-great Rapid City.

With the cure and all her future at stake, Scarlett is prepared to do whatever it takes to bring these criminals to justice so she can return to her family. But this gang and their leader, Rez, aren’t what everyone says, and Scarlett begins to question everything she was ever told about the SCF and the fire flowing in her veins.

The cure is her only hope for returning her life to what it was before, but is that life worth returning to after all? 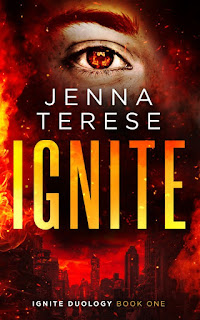 I'm going to be honest - superhero fiction, whether in the form of books, movies, or whatever else, is usually not my go-to genre. Sure, I enjoy a good Marvel movie as much as the next person, but in general the whole genre tends to feel like a rinse-and-repeat rehashing of the same story line over and over.

But I recently had the privilege of being an advance reviewer of Jenna Terese's upcoming debut novel, Ignite (coming out July 2nd), and I was surprised and delighted to discover that it is wonderfully unique.

Superhero fiction has long been a genre known for symbolizing humanity's values and fears in the form of its heroes and villains. Ignite follows this tradition, but with a twist that addresses the new set of fears many of us find ourselves facing in the wake of the drastic cultural shifts of the last couple of years.

Ignite's protagonist, Scarlett, is suddenly transformed against her will into an illegal "super" - something all of society hates and fears - and finds her life turned upside down as a result.

In a culture where a wrong word or opinion could label you as any of a dozen hateful names and result in being cancelled, publicly shamed, fired, or worse, Ignite not only reads as a compelling, well-written story in its own right, but also offers an exploration of a world in which anyone could be at risk of becoming an outcast.

From the refreshingly original take on the concept of superheroes as something hated and feared rather than lauded, to the timely and relevant exploration of current social issues, I can definitely say that Ignite earns its place as my favorite superhero novel.

This is an exciting debut by an author from whom I look forward to read much, much more in the future!