Mischief, magic, and manners are all qualities of Lady Meredith Lofton, heroine of my new release, The King's Spell. In this snippet, she is sneaking about the woods with her lady's maid, Sophia, trying to find a little girl they were asked to rescue from a group of unsavory travelers. Instead of finding the travelers or the girl, they find our hero in the river, in need of a bit of help himself. Meredith is more clever than skilled in water rescues, however. 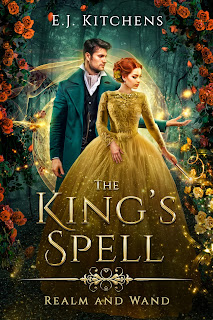 Between the third and fourth wagons, Sophia nodded toward the river bank. We walked to the few slender trees brave enough to dare the bank and then disengaged our umbrellas. She leaned against a shedding birch and crossed her arms. “How are we to know this girl? Even if we spot her asleep in one of the wagons, we can’t get her out without notice.”

The same concern had been weighing in my thoughts. “What if we wait until morning? We’re bound to see her out and about then. She’s sure to step away from the camp to relieve herself. We can talk to her and offer to take her away.”

“And what if they don’t let her go alone?”

Sophia scoffed but held out her hand for me to pull her upright. “Let’s find Brady. It occurred to me those shots may have been from the soldiers hunting for the dead messenger.”

“What? Why didn’t you tell me that’s what he was doing?” Somehow the idea of a body lying around with nothing to do but decompose didn’t make traipsing through the woods appealing. Nor did meeting the animals it would attract.

Sophia grabbed my arm at the masculine yell, and we spun around. Had they found the body? So near? Was it too late to disappear before they got us involved?

“Throw us a rope.” There was a harsh clap, like someone slapping water.

We dashed to the river bank. Grabbing a sapling, I leaned out over the water. An extremely portly man swam with one arm toward the bank. No. Two men. One held the other’s head to his chest. They were still a ways up from us. How on earth could we help them? I was a terrible swimmer.

Up a creek without a paddle, more like it. “There’s a fallen tree in the water just ahead on your right. Can you grab it?” I yelled.

Just how much could someone without the night-vision potion Sophia and I had see on a moonlit night?

I seized a handful of my skirt and ran along the bank, jumping water-formed dips and small holes, which possibly held creatures I didn’t want to think about right then.

“Got it, but it’s not stable,” he yelled over the rushing water.

“Just hold on. We’re coming,” I assured him. “But what are we going to do?” I mumbled. Where was Brady? We could really use those muscles of his.

“You’re an enchantress, Meredith. You’ll think of something.” Sophia ran behind me.

That’s right. I could do something. I could.

“The limb is breaking.” The swimmer’s pronouncement was followed by a creak that made me grimace. “I might make it to the bank a little ways down if you could meet us with something for me to grab.” He didn’t sound confident, and there was a definite slur to his speech. There wasn’t anything but steep bank further down.

“Don’t worry. That limb won’t break.” I infused my voice with more confidence than I felt. I slipped the wand from my sleeve, wrapped my arm around a slim tree trunk at the edge of the water, and leaned out. I hoped the glue spell worked on wet trees as well as it had on Serena’s saddle. “Inhaeresco!”

He uttered something indistinguishable, but didn’t move. Neither did the branch. My eyebrows raised in surprise, and I cocked a smile. Two for one.

I took off toward the fallen tree again, replacing my wand.

“Did you just do what I think you did?” Sophia did not sound as pleased as she should have been. “Johnny was right about your part in Serena’s accident at the park, wasn’t he? Really, Meredith, if you don’t stop, you’ll be as bad as the ladies at the palace King Reginald and your father try to shield you from.”

“This is no time to lecture, Sophia. And if I hadn’t been practicing that spell for Serena’s saddle—Eek!”

My foot touched only air, and I tumbled into a muddy tributary dipping down to join the river. I smacked into the opposite bank, fell back, slipped on a slime-covered rock, and skidded down the root-studded trough.

Pain shot through my hip as it collided with a fallen tree. I threw one arm over the tree trunk, its bark scraping my skin as I hugged it, and skidded to a halt. A squeak escaped me as the fingers of my other hand splayed into wet sand at the edge of murky black water. Too close. Far too close.

I pinched my lips against the pain throbbing through my hip. “Wouldn’t dream of it.” I gingerly lifted my shaking hand from the tree and pushed up against the hard-packed sand until I’d pulled my knees underneath me. The umbrella pressed against my skin in a cool line as I ascertained that it and my wand were still in place.

I quickly inspected “our tree.” It hadn’t slipped from the bank into the river; it’d been washed downstream and gotten caught in a tangle of debris and vines from the bank. The silt buildup from the tributary I’d traveled may have been acting as a dam. The fallen tree was precariously perched indeed.

Sophia stepped up behind me, grabbed me around the waist, and heaved me to my feet. “You didn’t answer the man’s question.” She grunted as I lost my footing and nearly toppled us. “Are you all right?”

“Yes. I’m fine.” I let out my breath with a whoosh as my feet planted firmly on the slanting ground.

“Good.” She held out a stick about my length and gnawed clean of bark. “This might be useful. You rolled over it on your way down.”

I took it with one hand while rubbing a long, narrow sore spot on my thigh.

A stick. Why couldn’t I have earned a bruise shaped like a coil of rope with a life preserver attached to it?

The rut I had traveled down with the small sand bar at its mouth was the only way up the steep bank. Unfortunately, the current was strong here and was already tearing at the poorly lodged tree. It’d be hard for him to work his way up the tree hauling the other man with him. Especially since my glue spell anchored them to it.

I shivered as the wind blew against my damp clothes. Those men must be near hypothermia. Brady, where are you? We need you. Come, please.

Sophia put her hand on my arm. “You keep an eye on them. I’ll go find some vines; we can make a rope.”

But an idea had struck me, one that made my toes curl, my stomach churn. But attempts to dismiss it led to visions of stiff, blue men tangled in vine ropes.

I sucked in a deep breath for courage and raised the beaver stick. “There’s no time. I’ll go get them.”

I stiffened my back as if doing so could firm my resolve. “Thank you for your concern, Sophia, but I’ve considered the risks and made up my mind.”

She paused, then snapped her mouth shut, her eyes wide. It wasn’t until I handed her my cloak that she recovered enough for a retort. “Any last words to your father?”

“Do you have any last words for your dear husband in case a wild animal gets you while I’m gone?” I summoned enough courage to smirk at her and then flung a glue spell at the tree’s root ball, the clump of debris, and the bank. Lifting the stick, I stepped onto the fallen tree and carefully tested its roll. It was pretty steady. I took a couple of steps, then dared a glance at the floating pair.

The conscious man watched me, his eyes straining against the dark. A sense of familiarity struck me, but he turned away and beat his hand against the other’s back.

Blocking out some distracting yelling from upstream, I looked down at the rough bark beneath my feet. The trunk ran out from the bank about twenty feet, angling downstream, then tapered as it gave its wood to the dozens of flimsy side limbs with their own smaller and flimsier branches. On one said flimsy branch clung our soggy companions.

My heart picked up speed as I looked at the thin limbs.

It’s only water, and you know how to swim.

And Brady is sure to be here any minute to save us all.

I took a slow breath and inched forward. Another breath. Another step.

The conscious man’s slaps finally ended with a surge of coughs from the other one.

Thank you, Lord. My shoulders sank in a relieved sigh but quickly stiffened again as the tree rolled slightly underneath me.

“Hanging in there?” I queried after my heart had slowed sufficiently for speech.

“Do I have a ch-choice?” A touch of amusement tinged his voice, but it quickly sobered as he shivered. “I hate to seem d-doubtful, but what is your p-plan?” The words came out thick and slow, barely audible over his companion’s gasping breaths and the river’s subdued roar. “I’m . . . going numb. I’m not p-p-positive I can make it b-b-back with him the way you’re c-c-coming.”

His begrudging admission made me smile, though my stomach knotted at his obvious fight against the cold. “My plan is to bring you both to shore. Can you float on your back?”

“Why?” he asked sharply. His tongue obviously wasn’t that numb. “Please tell me you know more spells than that staying spell.”

His words brought me to a halt. How did he know about that? “Of course I do.” Of all the impertinence! After all, I was risking my neck for him.

I huffed and inched forward another foot. Actually, I didn’t know many from memory. Shamefully few in fact. But it wasn’t any of his business.

Having walked out as far as I dared, I braced my feet on the limb and crouched down. “Since creating something out of nothing is a power reserved to the Almighty, we’ll have to improvise. We have no rope, but we do have a nice, long beaver stick.”

“Not another stick,” he muttered.

If you enjoyed this snippet and want to find out how our hero came to be in this predicament, you can purchase the book here.