It's here! I am so excited to share the release of The King's Spell with you today! This book has been begging to meet the world for a long time. In 2013 I published my first novel (The Beast's Enchantress, later re-released as The Rose and the Wand in 2017). In that book, there is a handsome gentleman and his brother who turn out to be among the bad guys. I liked them, one in particular, too much to leave them among the villains, however, so I began a story for them, and hinted at it at the end of The Rose and the Wand. Magic Collector Lord Devryn Collins in The Rose and the Wand now gets his chance to be a hero under his true name of Devryn Ashby, in The King's Spell. 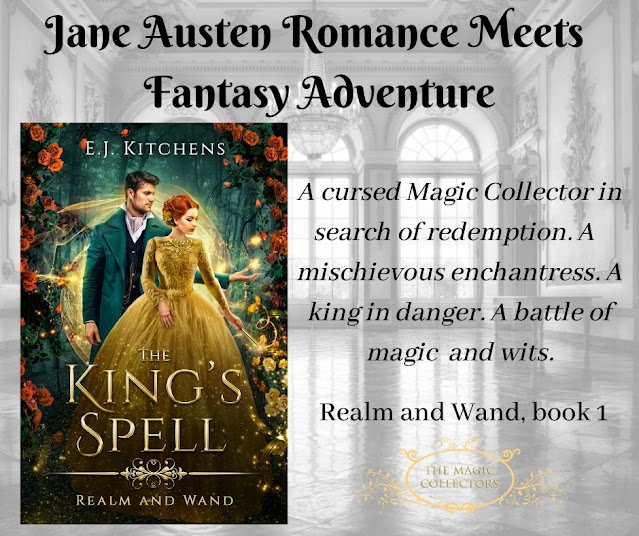 Only a king can banish sorcerers and strip enchanters of their power. Only a king is immune to spells and potions. Only a king knows the truth behind the legends. Until now.

Magic Collector Devryn Ashby may have deserved the curse that saps his magic-manipulating abilities, but it certainly won’t help him with the task King Reginald has assigned him. Instead of allowing him to continue hunting for those who stole the powerful Enchanter’s List, the king makes Devryn trainer-in-magic to the mischievous enchantress Lady Meredith Lofton.

Except for an occasional matchmaking exploit, Lady Meredith has little use for her power of enchantment—until the king asks her to train in magical warfare techniques. This both excites and terrifies her. And irks her, for she refuses to be bossed around by the critical Devryn Ashby, a man she’s not even sure she should trust.

But as dangers increase and the sorcerers’ schemes unfold, Devryn and Meredith must choose whom to follow—their own desires and prejudices or their king. Only a king knows how much the kingdom depends on their choice.

With danger, wit, mystery, a hero learning to be heroic, and a mischievous enchantress, The King's Spell (book 1 of Realm and Wand) is a clean fantasy with a "Jane Austen romance meets fantasy adventure" feel. You can purchase it here. It is set in my larger Magic Collectors story world, but you don't have to have read any of the other books to enjoy this one.

What others are saying about The King's Spell

I thoroughly enjoyed The King’s Spell. Set in a Jane Austen-esqe world with fascinating magic, mystery, and intriguing and enjoyable characters, this book is a must for readers looking for something more than the usual medieval fantasy fare. I need the next book (and a cup of tea) now!

A compelling mystery wrapped in a complex and richly detailed world.

I thoroughly enjoyed this story. The unique, fully realized magic system captured my interest and the realistically developed characters held it, binding me to the unpredictable, compelling plot that kept me guessing. I didn’t want the story to end, and I may have wailed in despair when it did.

The King’s Spell draws readers more deeply into Kitchens’ unforgettable world of manners, magic, adventure, and romance. Half-magic Devryn Ashby is just as delightful a hero as anticipated, especially when paired off against the mischievous enchantress Lady Meredith Lofton. With just the right balance of wit and danger and an entertaining cast of multi-faceted characters, I can’t wait for the next installment!

~Laurie Lucking, award-winning author of The Tales of the Mystics