Greetings once again, all!

I hope you are well and well-read. We are getting A LOT of rain where I live, but my house is high and dry, so I'm not too worried. Plus, it's great reading weather, and school's almost out for the summer, which means A LOT of reading time for me!

Today I'm sharing a snippet from my recent release, Guardian Prince (book two in the Ceryn Roh Saga). As you know, I'm a huge fan of fantasy, but it always vexed me that a deity-based magic system could be ultimately controlled by mortals. I always that thought that if mortals received magical ability from a deity, that deity should have the authority to decide when and if the mortals get to use it, or else why was he/she the deity? In Guardian Prince, I chose to explore what a deity-based magic system would look like if the deity whose power is being used not only could but did say, "No." This excerpt is one of Sabine's introductions to that kind of magic system. I hope you enjoy! 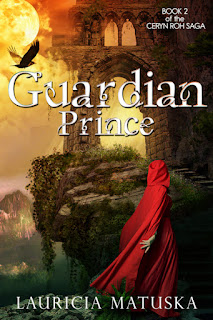 Sabine followed a dry stream bed until she came upon a large stone jutting out into the path. Water marks stained the lower half, revealing the gradual recession of the river that had once flowed around the rock. The top was relatively smooth and flat, so Sabine sat upon it, settling into the safe, familiar comfort of being alone in the woods.

She had not been there very long when she heard the snap of a twig. Sabine tensed, suddenly alert, but the noises of the animals around her continued unchanged, so whatever had moved nearby was not unfamiliar to the surrounding animals. Since this meant it was not an Aethel, she relaxed.

“You have good instincts,” Koen said as he emerged from behind a nearby tree, “but you dropped your guard too soon. Although the forest knows me, that doesn't mean I'm safe for you.”

“Koen,” Sabine greeted the Dryht tersely. Frustration flared within her, stirred to new life by his intrusion. “What are you doing here?”

One corner of the Dryht's mouth curved wryly. “Communing with the forest. It's what Dryht do. Mind if I join you?”

Before Sabine could say no, he sat beside her on the rock.

“How soon do you expect to hear from Gaoth,” Sabine asked, her tone more terse than she intended.

“The bird is fast, but he gets distracted. A juicy berry here or a lovely she-raven there, and business is a lost priority. I don't expect him until morning.”

Sabine nodded, but grimaced inwardly. So much for that topic. “So...you knew my friend Mariel?”

Koen nodded. “She did much to fight for the freedom of your people. She was not strong in her use of magic, but she was diligent. She worked hard to master her ability.”

Sabine shook her head. “I never would have thought it.”

“That was rather the point,” the Dryht countered. “What about you? Your mentor believed you held even more potential than your friend. Shall we find out?”

Koen glanced around, exaggerating the action as if to make a point. “You have pressing business elsewhere?”

“All right,” Sabine consented. She truly wanted to say no, but it was clear the Dryht was not going away. “How do we begin?”

"Technique,” Koen stated simply. “The last time we spoke of this, we discussed how all magic comes from one of two sources: the will of Torian or of Nymhon, depending on whom you serve. So. Now you learn how to tap into that power.”

“Let me guess,” Sabine said when she recognized the Dryht's silence as a prompt. “A prayer? A chant? An incantation?”

“All of those are options,” the Dryht conceded, his tone reluctant, “but each of them is time consuming. It's really just a simple matter of the will. You focus on what you want to happen, will it to occur, and it happens.”

“As long as Torian allows it,” Sabine amended, recalling the night of Aodhan’s rescue. She had certainly wanted the arrowhead out of his shoulder, but nothing had come of it.

“Yes, there is that. Still, calling on your will is much faster than any other option and is preferable in any number of situations.”

Sabine was about to ask for an example, but she remembered when she had first used magic to rescue Danelle's baby from being still-born and kept quiet. As she considered it further, she could imagine many instances in healing when time made all the difference. “I suppose this method is the easiest to learn as well?”

“Actually, no. The benefit to prayers, chants, and the like is that they help you narrow your focus and pinpoint your will. It takes much discipline to focus your will without them, because you can be easily distracted by everything around you. You must be able to block everything else out.”

That shouldn't be a problem, Sabine mused, since she had been blocking out distractions all her life: her mother's criticism and negativity, her sister's snide comments. Blocking things came easily to her.

“Yes,” she replied, chagrined at the way she had let her thoughts wander. So much for focus.

“Then watch.” The Dryht held out his hand. A moment later a butterfly rested in his palm, opening   and closing its wings a few times before fluttering away.

"Did you make that?"

Koen chuckled and pointed to the opposite bank of the dry riverbed. “No. Creation of something from nothing is reserved only for Torian and the Creator God. I simply moved it from that flower over there.”