We're so excited to welcome Angela R. Watts to Lands Uncharted today! Her YA fantasy, Golgotha, comes out this Saturday, April 10th! I'll share more about her new release below, but first, Angela took the time to answer some questions for us. Enjoy! 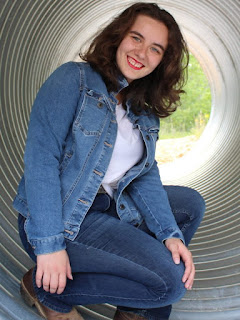 Ah, nothing beats the smell of books :) What prompted you to start writing? Are you one of those authors who knew you were meant to write since childhood, or did it come as a discovery later in life?

I started telling stories when I was super young. At six, I narrated a story with my mom writing it out, and then illustrated it. That was my first real book (guys, it had a climax and everything… ha!) and I never looked back as God led me to write story after story. The glory goes to the Lord, none of this would have been possible without Him!


How cool that you got started at such a young age! Which fictional character (book or movie) do you most relate to, and why?

The funny answer would be the hermit romance novelist from Romancing The Stone, but if I’m being real, I’ve related immensely to Mitch Rapp, the assassin from the Rapp series. No, I’m not an assassin, and I’ve not faced what he has. But I often find myself feeling alone, and like I’m the only one willing to face the darkness for a fight. The Rapp novels have inspired me in my personal and writing journey.


I love that inspiration can be found in surprising places! We’re all about exploring new worlds here at Lands Uncharted—if you could choose one place to visit, real or fictional, where would you go?

I want to travel the world, as typical as it sounds. I’d much prefer traveling our world than any fictional place, simply because all fiction is inspired by something, and God created such a vast world… A world I’ve barely had the honor of exploring! I think I would like to visit Scotland, no particular town or shore.


Ooh, great choice! What advice would you share with an aspiring author?

Write without looking around or looking back. Comparison will likely do nothing more than slow you down. And it is better to cringe at old writing than never have finished a project at all.


Absolutely! What a great perspective. Your YA fantasy, Golgotha, releases on April 10th! Congratulations!! What inspired you to write it?

Thank you so much!

Growing up, I read a lot of fantasy, but never finished a fantasy novel. As I dove into the world of Biblical research and supernatural warfare, I looked at an old story idea I had tossed aside… The rest is history.

I'm so glad it finally worked out! Did any of the events in the book surprise you as you were writing?

Yes. Most of them, in fact!

I wrote Golgotha about three times before I was happy with the outcome, and from there, it continued to grow and change. This is a novel that was truly led by God. I would have moments where I didn’t know what I had written or where a plot point was going until God opened my eyes and I went, “Ooooh!”

So much of this novel is constant surprises and lessons God taught me as I wrote them. I am not a punster and do follow rough outlines, so it is always incredible to see God carve and mold my novels.


It's truly amazing to be able to use your creativity alongside the Creator. Can you give us any insights into your next project?

My next confirmed publications are The Mercenary’s Deception, The Infidel Books 3 (July 2021) and Finding God in Anime: A Devotional for Otakus (spring 2021). I might also have a thing or two in store, but you’ll have to follow me for the extra surprises!

My current work-in-progress is the second installment of the Remnant Trilogy! If you enjoy Golgotha, no worries… there is more to come!


Good to hear! We'll stay tuned :) In the meantime, here's the back cover blurb for Golgotha:

Four unlikely companions must band together to escape the Realm of Bones and save their kingdom from a reign of darkness.

Prince Moray will lead his empire to glory, even if it means dabbling with forbidden black magic. But when their parents are murdered, Moray and his brother, Finnigan, are cast into Golgotha—a realm where hope is dead. Finnigan fiercely believes his god, Elohai, will rescue them, but Moray will never trust again.

Princess Ama, promised in marriage to Moray to ensure her clan’s safety from rival tribes, arrives just before a coup and becomes trapped in Golgotha with the smart-mouthed mercenary, Gunnar. Surrounded by strange monsters and ravenous demons, Ama must fight to hold on to her faith—or lose everything.

Despite Ama’s Gift of prophetic dreams, Finnigan’s Gift of energy, Moray’s magic, and Gunnar’s blades, nothing can rescue them from themselves. If they fail to escape, darkness will devour the entire kingdom.

Shadow and Bone meets Mark of the Raven in this epic for fans of faith-based young adult fantasy. 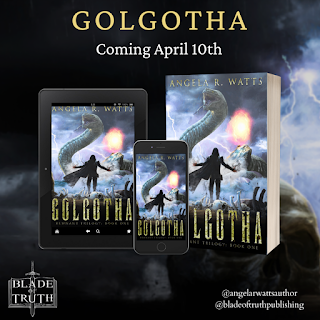 Doesn't it sound fantastic? You can pre-order Golgotha HERE. And make sure to check out Angela's website to find out more about her and her other books! Thanks so much for visiting today, Angela, and congratulations on your upcoming release!