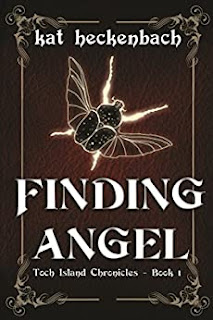 For this Weekend Read, I'm going retro back to my first years in the writing world, and one of the series that drew me into Christian speculative fiction, The Toch Island Chronicles by Kat Heckenbach. This series is one of my all-time favorites. Finding Angel is the first book in the series. I recently listened to the Audible recording of it for the second time (my third "reading"), and it was even better this time around. Alas, it's the only book of the trilogy available in audio format, but I assure you it's every bit as good in print as are the other two books in the series.
Angel is an orphan who meets an unusual boy named Gregor who whisks her away from her foster family. He has a special Talent that allows him to travel long distances by drawing gates. He takes her to Toch Island, her homeland, which she doesn't remember. They go on a quest to find the man who tried to kill her as a small child. On Toch Island, Angel discovers her Talent, her true identity, as well as friends and family including an Elven rocker with more attitude than he has tattoos and a kindly professor with a pet dragon that prefers naps to barbecuing objects or people. There is so much to love about this series, memorable characters, an intriguing setting, and a tight, well-paced plot.
Kat Heckenbach is an artist as well as an author with a background in science, all of these details come into play in Finding Angel. Her artist's eye and creativity are apparent in her vivid descriptions of Horatio, a black and silver beetle to the metallic trees and quaint village on Toch Island. Her magic system is based on a manipulation of the laws of physics. Simplified, it's the ability for the inhabitants of Toch Island to pick up a piece of trash and drop it into a trashcan using aerodynamics like an airplane flies from New York to LA along with their special Talents. The magic system is related to faith, a subtle element that makes the story so much deeper on subsequent readings.
The entire series is clean and appropriate for a YA audience. Finding Angel would appeal to teens of all ages as well as adults. The series spans several years and romantic relationships develop; however they remain subplots and even when couples are together, their interactions are often focused on the friendship and caring aspects of their relationship instead of emphasizing the romantic and physical like many YA books.
Posted by Gretchen E.K. Engel at 6:00 AM