I love autumn, and October is my favorite month of the year. Not only do we get at least a little respite from the summer heat here in southeast Texas, but I am absolutely enchanted by the mellow quality of the sunlight that only comes in autumn; the colors of the leaves; the mists that rise in the mornings; and the rich smells that speak to me of ancient days and mystery. *sigh*

My Weekend Reads pick this month is a bit of a risk. It’s a clean read, but it does contain a small smidge of language in that it uses the more… colorful… word for “illegitimate son”. However, as this same word has a real and appropriate meaning, I’m considering this a gray area open to personal interpretation and preference, so I’m taking the risk and recommending The Hallowed Hunt by Lois McMaster Bujold. Here’s why: 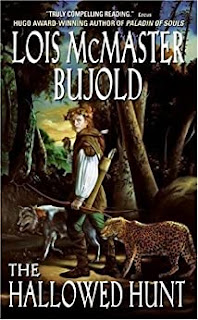 Lord Ingrey kin Wilfcliff is a man haunted by a terrible destiny. Cursed at a young age to bear the spirit of a wolf, he lives a life of balance between being a disinherited but valued swordsman and being killed to rid the world of the danger encompassed in the wolf spirit he carries. He manages to keep the spirit subdued until he is sent to retrieve the body of the murdered Prince Boleso and to arrest the noblewoman accused of killing him. As he transports Lady Ijada to her trial and works to unravel the mysterious circumstances surrounding Prince Boleso’s death, Ingrey encounters a dangerous spell, a kindred spirit, a madman who can’t die, and multiple gods. He also discovers that the accused murderer he is escorting may be the only person he can trust.

First published in 2005, this book is actually the third in a series but reads as a standalone. The first two books (The Curse of Chalion and Paladin of Souls) each follow different protagonists, so this story works on its own. I had no trouble slipping into it, and I never felt as if I was missing information from the other books.

I really enjoyed the classic fantasy feel of this story, but what I loved most was the redemption scene at the midpoint. The characters of this world worship a pantheon of gods comprised of Father, Mother, Son, Daughter, and…illegitimate son (my phrase, not Bujold’s). When Lord Ingrey experiences an encounter with the Son, the scene is such a perfect rendition of an undeserving soul experiencing the cleansing redemption of Christ that I was moved to tears. Truly, which is why I’m taking the chance to recommend this book.

I’d love to know what you think about appropriate and inappropriate language in your reading and in our recommendations. Please share your preferences and your reasons for them in the comments below.