We made it to another weekend! I don't know about you, but in our house that feels like a major accomplishment these days :) And since it's Friday, I get to share a book recommendation with you!

Last week, Sarah reviewed a Regency-era fantasy called Shades of Milk and Honey by Mary Robinette Kowal. I thought I'd continue in that vein by sharing about another Jane Austen-esque fantasy - Asperfell by Jamie Thomas! 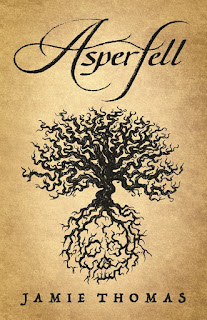 Briony spent much of her childhood far from home, raised apart from the dangerous court intrigues of a king whose fear and intolerance of magic caused him to banish his own brother to Asperfell, an indestructible prison in a different realm designed specifically to hold the most threatening mages. When her father's participation in a rebellion is discovered, Briony finds herself face to face with the vicious king, sentenced to death for possessing magic her parents had desperately tried to keep hidden. In a last-ditch attempt to procure the king's downfall, the rebellion saves Briony by instead sending her to Asperfell, hoping she can find a way back with the mage-prince who should've inherited the throne. In Asperfell, Briony struggles to unearth the secrets of the prison and her own magical talents, all while suffering the indifference and snide remarks of Prince Elyan and the cruelty of her fellow prisoners. But just as she settles in with a new set of alliances and a distinctive use for her newly-discovered magic, a betrayal sends her on the run once more, making her quest all the more urgent.

This book was so beautifully written! I loved the lush prose, vivid descriptions, and sophisticated writing style. The prison of Asperfell was a fascinating concept, as were the various types of mages in the fantasy world. Briony was a fun character to adventure with, and I appreciated the complexity and dynamics of the secondary characters throughout the book. Although a certain gentleman made me frustrated on numerous occasions, the hints of romance did make me grin :) The opening chapters were a little on the slow side since there was a fair amount of back story, but even then the hints of mystery kept me reading, and once Briony reached Asperfell I could hardly put it down! Based on something I saw on Goodreads, Book Two is expected to release sometime in 2021 - I'm very much looking forward to it!

(While this was a clean read as a whole, there were a few descriptions that were a bit graphic, especially an instance of unwanted sexual advances. They were handled well and central to the story, but if you prefer to avoid such content this might not be the book for you.)

What have you been reading lately? Do you have any Jane Austen-style fantasy books to recommend?