Is it April yet? Because I have a bookish date in April with books 4 of the Elven Alliance series by Tara Grayce. It's only September, you say? In that case, I may have to solace myself by talking about, or maybe even re-reading, books 1-3. :)

In all seriousness, I do highly recommend this steampunk series by Tara Grayce, which begins with Fierce Heart. It's about a marriage alliance between a chatty human princess and a silent warrior elf prince. The goal of Essie and Farrendel's marriage is to help keep the peace between the humans of Escarland and the elves of Tarenheil, but traitors amongst their people and the trolls of the north are making that difficult. It will take all their diplomacy, fighting skills (which includes Farrendel's powerful magic), and a growing love to save their kingdoms.

Refreshingly, there are no evil guardians or greedy parents, no selfish tantrums at all much less ones about an unwanted marriage, no attempts to run away with some charming cad. Just a dutiful princess with a caring family trying to bring peace between two kingdoms and a quiet elf prince scarred by war trying to do the same thing. They're honorable and kind and willing to sacrifice for their kingdoms in big ways and for each other in big ways and in small, everyday ways that make a huge difference in a relationship.

Essie and Farrendel (I love the way his name sounds) realize love is a choice and act kindly to one another, enduring the awkwardness of being suddenly married to a stranger and the difficulties of dealing with different cultures and unfriendly people. There's delightful humor, over-protective brothers, plenty of elf hair jokes (I want some of that elf shampoo), sadness in the scars left by war and the bad choices of others, some adventures, and of course, romance as Essie and Farrendel's relationship develops. There was a bit much of Essie admiring how handsome and fit Farrendel is for my taste, but considering he was a stranger when they married and he tends to be quiet, she didn't know much beyond what her eyes could tell her for a while. She works hard to know the whole Farrendel though, which makes up for it. The kingdom of the elves is pretty cool so, as is the magic. I absolutely loved Essie's family and over-protective brothers. I very much anticipate one brother ending up with a certain elf princess. 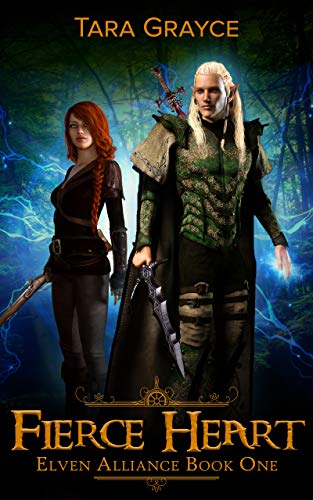 I read Fierce Heart pretty quickly and moved on to War Bound, then Death Wind (which I only had to wait a week to read, since I started the series late). Those books didn't disappoint. Plus, they added new characters and relationships to explore. I can't say too much without spoilers, but I imagine if you start the series, you'll want to continue on.

Have you read this series? I haven't read many elf books, but I am glad I broke from my usual "I only care about Tolkien's elves" mindset to read these.