The 7 1/2 Deaths of Evelyn Hardcastle, by Stuart Turton, is a book I almost loved.

As you may have noticed, I'm an audiobook worm, and this fun speculative sleuthing story (if that wasn't a thing, it is now) is a recent listen.

At first, I was enthralled! This book combined my two favorite things: mystery (of the whodunnit variety) and mystery (of the fantasy/paranormal variety). It's Agatha Christy meets Orson Scott Card. And it is also quite clean (PG), which was refreshing! 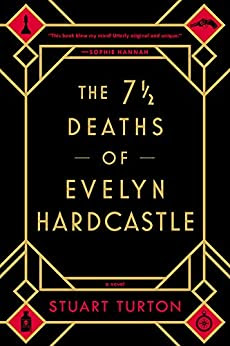 Readers begin their journey from the POV of Aiden Bishop, who has amnesia, and is witnessing a murder in the woods. He cannot remember anything before that awful moment. Horrified and confused, he stumbles up to a huge manor house called Blackheath, where he learns that he is a guest. Not just a guest, but actually a competitor in a twisted mental game. Oh, and its on the 20th anniversary of the murder of a little boy who lived at Blackheath.

With guidance from a man disguised in a plague doctor's costume, Aiden learns that he will be witnessing the murder of Evelyn Hardcastle, sister of the dead boy, every day for eight days--from a different guest's point of view. The goal is to figure out who murders her and, possibly, to prevent it. If Aiden can do this, he will be able to leave this repetitive nightmare. The catch is, two other people have the same goal and only one can be released! Also, the murdered woman in the woods is NOT Evelyn. Hmmm. 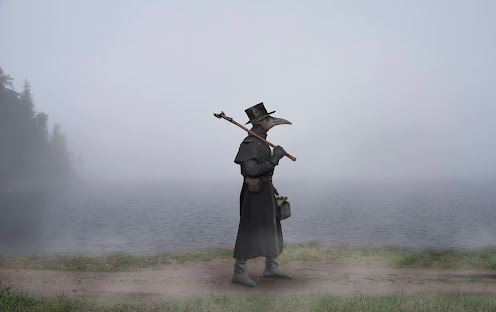 This story was a lot of fun to listen to in the beginning. The narrator, James Cameron Stuart, did a fabulous job with the characters, bringing each uniquely to life. But circling through the same day from different character's perspectives soon became discombobulating! The same day lasts for eight days, for one. And if one of the guests happens to doze off in the middle of the day, or is knocked out in a scuffle, that day starts over and it begins back in the body of the butler who was attacked by the man hired to paint a portrait of the family.

This is not a story for sleepy, armchair detectives! And, although entertaining, there were too many loops into the same day, and from so many POVs, that I could not keep track of who was doing what merely by listening. Not to mention that the same events told from slightly different vantage points gets a bit tedious.

Still, it was such a unique story, with a lot of fun characters and intrigue, I'd have to recommend it with this caveat: know what you're getting yourself into! Grab a notebook and pencil, get an actual copy of the book which would allow you to flip back and forth, and DON'T expect to have an easy read! Let me know what you think of this book if you've read it, or if you decide to give it a try.