Weekend Reads: The Elves of Lessa by K.M. Shea (Kimberly)

It's that time again, lovely readers! Heading into the final days of August, I have the perfect series for your weekend binge needs. The Elves of Lessa by K.M. Shea is a series full of sweet romance, laugh out loud humor, and just the right amount of political intrigue in the backdrop of a fascinating epic fantasy world with elves and humans.

The Red Rope of Fate (The Elves of Lessa Book 1) 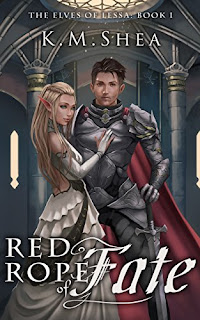 So I first picked up this book a couple years ago after a friend recommended it to me based on the hero being my type. And she was right. Arion is the very proper human captain who's a stoic with a dry wit and a heart of fluffy gold buried beneath the surface. And I do love him. Especially as he grows more aware of what Tari wants from him (using his words to express his buried feelings is a big thing lol). Arion and Tari are such opposites but they work so well together. They're fun yet sweet.

Red Rope of Fate is a fun introduction into the world of Lessa where the Lesser Elves have a long standing treaty with the Humans of Calnor. There's just one catch - They cannot communicate with each other. So they use a magic ceremony to create a bond of friendship between the human royals and the most compatible noble elves and create a bridge between souls that would ideally bypass any need for translators. Unfortunately, that ideal was never reached . . . until Tari and Arion are bonded. Tari and Arion cause a huge stir when they can understand each other (and only each other) despite the language barrier.

As with every Shea book, the characters are the true heart of the story. Beyond Tari and Arion, my personal favorites are the two kings (they remind me very much of the kings from animated Sleeping Beauty), Seer Rinagli who is this caustic sarcastic hilariously unpredictable elf and Tari's training master among the Evening Stars (dancers/warriors with magic), and the Trio of Daftness a group of three honor guard soldiers who are hilariously incompetent when it comes to being proper soldiers much to Arion's chagrin and Tari's delight. And they're supposed to keep Tari out of trouble. I laugh so hard when these three are allowed to talk.

There's also a bit of political intrigue involving the nuances of the human court and Arion's family due to his sister marrying the youngest prince. Plus the challenges of certain people trying to separate Tari and Arion for varying reasons including crown prince Benjimir acting a little bit like Loki (an antagonist for a perfectly logical reason in his mind). All these elements and characters come to together to create a fun rich beginning to the world of Lessa that's simply a joy to read! 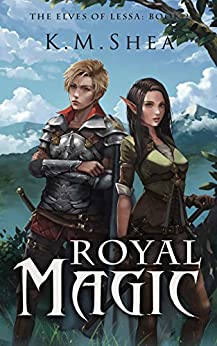 Oh Benjimir. He's too clever for his own good, which is what got him into the situation he's in when we return to Lessa and Calnor in book two of the series. This book picks up a couple years after the end of Red Rope of Fate and introduces Gwendafyn, the younger princess of the Lesser Elves. Fyn is struggling against the expected sedateness of Lesser Elves because of traditions wrapped in the past where showing too much passion and feelings is shied away from for fear of making humans view them like the war-loving High Elves who sailed away centuries ago. She is too much according to her aunt and utterly miserable acting as regent in the elven court while her parents and elder sister live in the human court at Haven. When she reaches her breaking point, she decides she must do something even if it's as crazy as marrying the former crown prince since he's the only other human who speaks enough elvish without being too intimidated by her mere presence like the translators.

Ben's story is one that could have been a struggle because we do meet him first as a somewhat antagonist in RRF and turning him into the protagonist can be hard. But Shea does an absolutely fantastic job turning him from misguided antagonist into an adorable yet annoying sass master not quite antihero who just needs someone willing to put up with him. And also challenge him properly. Which Fyn provides in spades. And almost from the very beginning, his good qualities are sneaking out.

Seer Ringali is present again. As is the Trio of Daftness, who are as kooky as ever. I continue to love the kings and their friendship as well as their relationships with their children. We get more of the queen's nastiness and hand in certain political issues too. All in all it makes for another fun entry into the world of Lessa and I loved getting more hints about the High Elves as well as the glimpses of how humans and elves are slowly coming together in true friendship beyond what was traditional.

The Prince's Bargain (The Elves of Lessa Book 3) 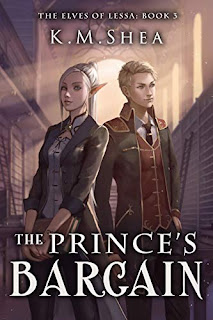 The newest entry in the Elves of Lessa series is just so adorable! I love how we've switched the character archetypes completely with Arvel and Myth, two bookworms who are definitely not harboring any martial inclinations and are both forced into positions they hadn't originally planned. Arvel into the position of crown prince and Myth into the role of royal social translator when she only ever planned and wanted to be a trade translator. No social nuances to learn or worse political discussions to endure if she's dealing with precise facts and numbers.

Myth is definitely one of my favorite characters now. She gets so flustered around Arvel when he starts acting like the "Prince of Seduction" (flirting is terrifying lol). And he very much enjoys ruffling her feathers. Oh I laughed so hard every time we get to one of her "Ack, the Prince of Seduction is back!" moments.

Arvel and Myth also have a fantastic growth arc as they learn to be more confident in themselves as well as proving they're not to be underestimated by the court. Oh I also have to add I loved that the elven queen finally had her own moment to shine in this book thanks to Myth providing an opportunity (and truthful translation). After being such prominent members of the first two books, I was definitely missing the Trio of Daftness when they popped up in the second half of the book. But their big scene so made up for that earlier absence. I almost hurt myself laughing at the scene from beginning to end. Shea also does the best job of one-upping their previous performances!

The Elves of Lessa is a fun group of interconnected standalone books. I love every minute of each one as well as each couple. Every couple is loved for a different reason since they all bring different personalities and interactions into play for their individual romances. There are more books to come and I, for one, cannot wait to read them! In the meantime, this series is a great read no matter how many times I come back to it and it always leaves me with a smile! It's the perfect choice for a feel good pick me up read!

Have you read this series yet? What did you think? Who are your favorite characters?