If you live in the south, like me, you might be avoiding the heat by staying indoors and reading your little heart out! Are you running out of material? Heaven forbid!

Well, to be on the safe side, I'm popping in to give you a fabulous, bookish recommendation. 😎 Award winning fantasy author Jill Williamson just released her book By Darkness Hid (Book 1 in her Blood of Kings series) as an audiobook! The only problem is, I am ready to start book 2, By Darkness Fled, but it's not on audio yet. 😒 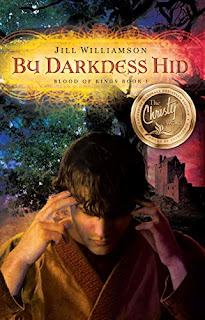 Narrated by fellow fantasy author Gillian Bronte Adams, (author of The Songkeeper Chronicles), I enjoyed every moment of this story (which deservedly won a Christy Award). Bravo to Gillian for bringing it to life so vividly. Her grasp of accents was impressive and her narration made for an intriguing and easy listen. How can one person be so multi-talented?!

By Darkness Hid follows Achan, an orphaned "stray" who works in the kitchens of a lord in the land of  Er'Rets. He senses things about people, and, on occasion, can even hear the thoughts of others. When a knight in the Kingsguard takes notice of Achan and begins to train him as a squire, Achan is suddenly the target of other powerful people who mean to do him harm.

Like Achan, Vrell Sparrow can hear what others are thinking. Though the gift of "bloodvoicing" is common among royals, she must keep both her royal identity and her gift a secret. Disguised as a stray boy in order to avoid wedding an awful prince, she succeeds in her deception for a time. But when she senses the voice of a young man in peril, she is drawn to help him. The problem is, other, treacherous men with the bloodvoicing gift have heard and taken notice of her and the young man as well. Now they're both in danger!

As they both learn to control their newfound ability, while trying to protect one another and the kingdom, a different kind of voice calls them to Himself. Will they learn to trust and obey this other voice or will evil have its way in the kingdom?

To find out, snag your copy of By Darkness Hid and enjoy the adventure for yourself! Full of castles and sword fights, conspiracies and deceptions, and all the medieval feels that fantasy fans adore, Jill Williamson does not disappoint!