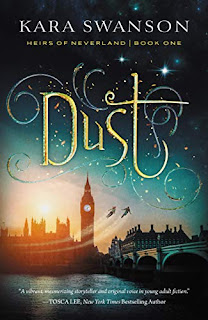 Enclave Publishing has released some fantastic titles lately, and Dust by Kara Swanson is no exception. When I saw its striking cover, I immediately wanted to take a deeper look. And when I learned it explored the intriguing concept of Peter Pan trapped in London, bereft of magic and unable to return to his beloved Neverland, it jumped higher on my reading list—and I wasn't disappointed. While firmly rooted in J.M. Barrie’s Peter Pan, Dust takes familiar characters deep into a new tale, one that’s fresh and satisfying.

In the original work, Peter refuses to surrender his perpetual youth, even when the Darling children and the Lost Boys return to London. While they choose to embrace the process of maturation and enjoy the rich bonds of familial love, Peter forsakes his friends and “family” to remain a carefree child, able to do whatever he pleases.

In Dust, we enter Peter’s life many years after the events recorded in Peter Pan, and Peter receives another opportunity to change—if only he will. Yet to the boy who won’t grow up, the prospect of growing older remains a horror to reject. I wanted to shake him at times, for the way he clung to his flaws, but despite them, he was a compelling character with a meaningful journey.

His tale is interwoven with that of Claire, a girl who is heart-broken over the loss of her twin brother and terrified of the dust emanating from her skin, which she believes to be a curse. In the six years since her the disappearance of her twin, Claire has clung to the belief that she’ll manage to track him down when all others have failed—and her mission puts her right in Peter’s path.

Both Claire and Peter desperately need each other, as each holds a key that the other requires. But   they also carry wounds that present great danger to themselves and to each other. If they cannot learn to move beyond their fears, they will fail. Faith themes are subtly woven into the tale, including the choices we must make between light and darkness and whether we will allow our pasts to define our futures.

In Dust, you’ll find much that feels familiar—frequent allusions to the events found in Peter Pan and inclusion of favorite characters such as Tiger Lily, Hook, and the Lost Boys—yet the plot is lively and fresh, allowing for all sorts of new possibilities and developments. Without giving spoilers, I will say that I didn’t fully buy one of Claire’s major decisions, however, I thoroughly enjoyed the story and eagerly anticipate the next book Shadow, which will complete this duology.

Have you read any Peter Pan retellings or spin offs? Do they interest you? This was a first for me, but a memorable one!
Posted by Sarah Sawyer at 4:00 AM