A few years ago I read the steampunk, loose Frankenstein-retelling Tainted by Morgan Busse. You can check out my review here. Me being me, I’ve just now finished the two-book series (I may be a little slow, but I do, usually, get around to things), the second and final book being Awakened. Isn't the cover amazing? 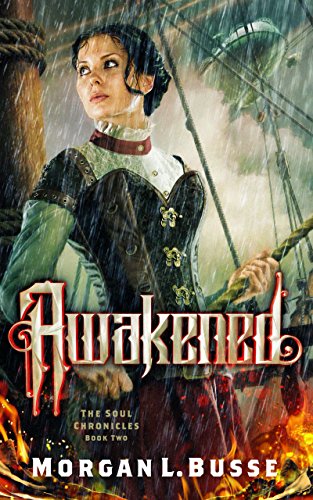 Awakened is a great conclusion to the story and was better even than the first book. In the first book, Kat Bloodmayne—born with strange powers she can’t use for fear of unleashing the monster inside her—is desperate to find a doctor who can cure her. Her soul is dying and her hold on her powers getting weaker. Stephen Grey is an angry, broken bounty hunter who agrees to help Kat but then, after discovering her powers and a murder charge against her, turns her over to the Tower, a corrupt scientific center partly run by Kat’s cold, cruel father, a place Stephen suspects is performing experiments on stolen corpses—and the nearly dead. Stephen returns to rescue her, however, and they have a dramatic escape.

Book two focuses on their search for a Dr. Latimer to cure Kat. With plenty of adventure, romance, and steampunkness—airships, canon arms, corsets, and so on—Awakened also has a wonderful picture of forgiveness and healing in Kat and Stephen’s relationship and in their dealing with the hurts of their past. I also appreciated the look at science and faith, the natural and the supernatural in the book, as Kat’s problem falls outside the realm of the natural world, forcing her to search for help from a disgraced doctor who believes in something beyond it. As a Christian and a biologist, and as someone who enjoyed Mary Shelley’s Frankenstein, I enjoyed that aspect of the novel and the additional depth it gave to a fun story of adventure and romance. If you’re looking for a great steampunk series, or just a good adventure-romance, check out Morgan Busse’s The Soul Chronicles.

And if you're a fan of audiobooks, both books just released on audio! 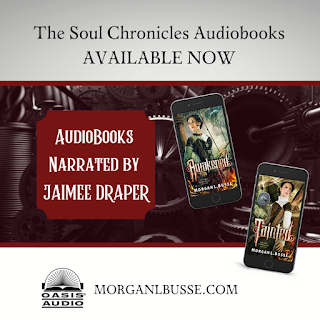