Hi everyone! Can you believe we’re midway through JUNE already? This year is flying by, isn't it? But I have the perfect summer escape in today’s book! For fairytale and adventure/intrigue lovers, The Secret Princess by Melanie Cellier is just the ticket!
The Secret Princess: A Retelling of The Goose Girl (Return to the Four Kingdoms Book 1) 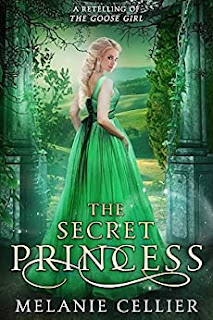 This retelling of the Goose Girl is the first book in Cellier’s third fairytale retelling series. While the book takes us back to the kingdom that started it all in The Princess Companion and brings several secondary characters from the second series into the spotlight, there’s enough background worked in that you can pick this book up without reading the first two series. But if you want to read from the beginning, there’s eleven novels and three novellas between the preceding series.

In The Secret Princess, I loved that we were able to go back and see the changes that happened in Arcadia during the twelve year time gap from that first novel including character cameos. This is something I absolutely adore when it happens because I so enjoy being able to check in on previous characters and discover what’s happened since we last saw them. Now I have to admit that Goose Girl is actually not one of my personal favorites and I can sum it up in one word: Falada. And if Falada is included in a retelling, there’s normally a heartbreaking adherence to the original fairytale. So I actually don’t read very many Goose Girl retellings and the main reason I picked up The Secret Princess was because I trust Cellier’s style and I was very hopeful that she would find a non-traumatic solution to the Falada situation. She totally delivered on that trust! Arvin is the most sarcastic, prideful, and hilariously sassy talking horse I’ve met! Think Bree from Horse and His Boy only even more sarcastic. I laughed so hard at his “I’m far better than a mere horse thank you very much” vibe and he’s now one of my favorite sass masters. The perfect answer to Falada and I hope we see him again as the series progresses.

I very much enjoyed Giselle and her interactions with just about everyone. The way she ends up in her situation and gets stuck there is simply perfect because it tackles those logic questions from the original fairytale in just the right way. And then we bring in the intrigue/adventure. From the moment Giselle is separated from her companions (and why) to the intense ending, there’s a wonderful current of intrigue and suspense. And the red herrings! Oh, they were just right in this one since Cellier actually made me guess at the shadowy background villain and then second guess. I was wrong both times on one piece, which actually made me pretty happy because it was a good surprise when the truth was finally revealed. The other piece was another red herring where I really waffled on calling it or not. And I loved the twist with Philip because I did not see that coming. All the twists and red herrings were the perfect amount of satisfying without veering into frustration.

This is such a fun read and I would love to go into even more exact details but I won’t because SPOILERS! I will say that the next book in the series, a Cinderella retelling, won’t be out until next year which leaves lots of time to catch up on the entire Four Kingdoms and Beyond universe if you’re just jumping in.

Have you read this one yet? What did you think about it? What are some other Goose Girl retellings I should check out?