Hi everyone! If you're anything like me, you are digging into books for some relief from our currently crazy real world circumstances. And I am so excited to share about a brand new series by one of my favorite authors, K.M. Shea!

This series is a new Urban Fantasy take inspired by a fairytale, Donkeyskin to be exact. Donkeyskin is not a fairytale for the faint of heart nor does it lend itself easily to non-horror retellings. That said, Shea shows why she is one of the queens of fairytale retellings because she found the perfect venue for tackling Donkeyskin while taking the cringe inducing parts of the story out. And I love it. 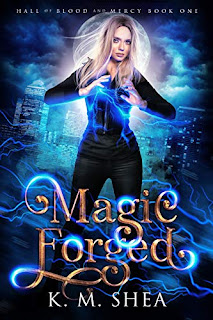 Let me preface this by saying Urban Fantasy is one of my top favorite genres and I have read a TON of it over the years, both traditionally and indie published. However, Magic Forged is officially one of my top all time favorites ever and I do not see that changing any time soon. I was up all night reading this one even though I knew I had commitments the next day. I regret nothing. This book is so worth the lost sleep!

Hazel Medeis is a wizard, a severely vertically challenged one with a bit of a power problem. Being the Heir of a small pacifist wizarding house isn't made any easier with the death of her parents and then a coup by an unscrupulous jerk of a cousin. Forced out on her own, Hazel only escapes her cousin's schemes by pledging herself to the service of Killian Drake the supreme vampire in the region. Who may or may not be trustworthy.

This book is not a doom and gloom approach to Urban Fantasy nor is it overly gritty. Even though heartstrings are pulled and wrenched by the opening circumstances driving Hazel into House Drake. One of Shea's strong points in all her books is the wit/humor and the sheer character of the people and animals and even, in this case especially, houses. I love the humor and banter in this book and I absolutely adore the characters, especially Killian and his top two vampires, Celestina and Josh. They are not what you expect from UF vampires really. Killian tries, he tries to be the intimidating looming dark and mysterious vampire but his devilish sense of humor and Hazel's ability to bait him into snarky banter ruins it all. And Celestina is one of my favorites because she's Killian's First Knight (second in command) but she loves girl talk and shopping and self-pampering at the salon complete with mani pedis. Josh is . . . I'm laughing just trying to write about him. I never thought that a poetically morose vampire would be so much fun but he's so unexpected (without being truly over the top) that he just works. Also he's essentially a walking armory as the Second Knight. Hazel's reactions to everyone makes for so many laugh out loud moments. That's not even touching on the rest of the cast including a fae with a bald cat called Aphrodite.

This book is so much fun and there's a lot of humor and snark and banter. But Hazel also has a discernible growth arc because she has the "annoyingly virtuous moral compass" as Killian likes to describe it. Which I love. She doesn't compromise the true core of who she is even as she grows although she learns that what she's been taught all her life and what is truly right don't necessarily match up. 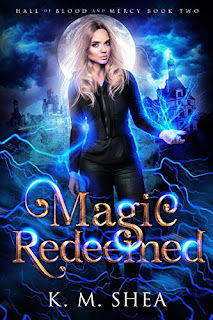 Can I just take a moment to scream because this book has so many FEEEELS! I adore book two as much as I loved book one. Hazel is coming into her own and we get more Killian POV scenes (YESSSS!!!) with even more of the vampires and their snarky existence with the vertically challenged wizard. However, there's still the problem of the House and Hazel's continued weight of responsibility as the Heir.

Once again the characters and the banter are my favorite parts. I also love that we get even more of the House and its personality in this book. And Hazel has to come to terms with her power, the sealing of her power, and the way it was unlocked in book one. She does have more angst going on toward her parents but it never gets TOO heavy for the overall lighter tone of the series. It's nicely broken up by antics and snark. I do love it when Josh spouts something about death and another vampire has to tell him "That's not comforting."

Killian and Hazel. Oh my good gracious gravy! These two are on one of those slow burn romances that put you on the Feels rollercoaster. Cue Gollum screams at a certain spoiler. Right in the feels!

There's so much more I want to say about the things I loved and raved about with this one but I can't. Because SPOILERS! All I can say is I'm so glad the third book in this series is out today because I need it. I need it now. ;)

If you have never tried Urban Fantasy before, start with this series. It's a fresh take on the standard tropes of wizards, vampires, fae, and shifters in some of the best ways. It's not too harsh but not mindless fluff either. It falls perfectly into the category of Urban Fantasy with lots of heart and humor, which is honestly my favorite of them all.

Have you read this series already? What did you think?