Oh. My. Goodness, y'all! I'm so excited to share my pick for this installment of Weekend Reads that I've tossed out my "professional" tone for the introduction and gone into full-on, unfiltered "me" voice! I honestly could not wait to review this book, and I kept worrying that someone would get to it before I could. For real, though!

That being said, I am beyond thrilled to introduce you to Jamie Foley's new book, EmberHawk (Book One in the Katrosi Revolution Series). Known for The Sentinel Trilogy, her YA dystopian series, Jamie breaks new ground in the fantasy world with EmberHawk and it's already scheduled sequel, SilverBlood. One of the things I loved about EmberHawk was the rogue-ish fox character of Felix, not to mention its gorgeous cover... but I'm rambling in my excitement. Without further ado... I present to you the review: 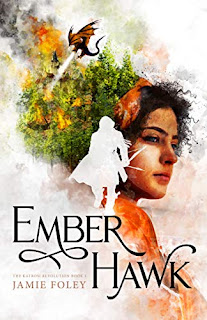 War is threatening in the Malano Empire. Conflicts between ranchers on the border and outlying tribes are increasing, causing hostilities to flare even as drought scorches the land.

With her father and older brother away preparing for war, Kira must help her ailing mother, her grandmother, and her younger brother maintain their family's ranch, but the drought has made resources scarce. Desperate to find a cure for her mother's mysterious illness, Kira supplements her family's resources by trapping animals in the wilderness across the border. Her family is barely holding on, but they're making it.

Until Kira accidentally shoots a tribal scout with an arrow.

He shouldn't have been on her ranch in the first place. Even so, if Kira doesn't make things right, this incident could spark a war that no one wants.

Set in a world where elementals roam the land and are worshiped as gods, is a fantasy unlike any other. The story world is a unique blend of ancient Eastern an American frontier that blends the two in a unique way, presenting a fresh take on fantasy culture.

EmberHawk is a tightly-woven story peopled with quirky, enduring characters that readers can relate to. The fast-paced plot drew me in and kept me engaged without sacrificing character development, and I thoroughly enjoyed the magic system and world building. The details dropped throughout this story like clues also hint at a richly-developed sequel that I can't wait to read.

I hope you pick up a copy of EmberHawk and that you enjoy it as much as I did. If you do, I'd love to hear what you think of it. Let me know below.