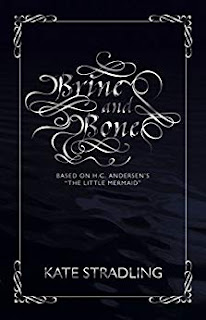 I’m a huge fan of fairy tale inspired stories and retellings. That said, The Little Mermaid has never ranked among my favorite tales. While the themes are meaningful, the plight of the mermaid in the original tale is a tragic one. And I’ve only ever seen bits and pieces of the Disney movie, perhaps the most well-known variant of the story.

So it’s saying a lot that I actually picked up Brine and Bone, Kate Stradling’s version of The Little Mermaid—and that I ended up thoroughly enjoying it! Brine and Bone offers a hope-infused retelling with an original stamp that still remains true to the key elements of Andersen’s tale.

Instead of a mermaid protagonist, Stradling presents Magdelina, a healing magician with a prickly personality, who has known and loved the prince since childhood, but harbors no hope of him ever returning her affection. When he disappears at sea, the kingdom goes into mourning.

After all expectation of his recovery is lost, Magdelina finds the prince washed up on shore and helps restore him back to health. But she soon discovers there’s a mystery surrounding his survival, one that may threaten him still. When an enchanting newcomer appears at the palace, her suspicions are roused, and she’s determined to protect her friend from the snare laid for him. But how, with dark and powerful magic arrayed against her?

The mermaid in this tale far more closely resembles that of classic folklore than the enchanting mer-creatures featured by Disney. She’s an eerie, at times even frightening figure, but one that in the end wins some sympathy. She has her own redemptive road to travel—or not—as she chooses, right alongside Magdelina.

While only novella length, the story grapples with the concepts of love, immortality, and sacrifice. And it all winds together in a satisfying way, touched by sorrow, yet on the whole uplifting.

Are you a Little Mermaid fan? Do you have any retellings you’d recommend?
Posted by Sarah Sawyer at 4:00 AM