Hi everyone! I'm excited to share my first Story Snippets with y'all where we meet one of my favorite leading men, Mathias from the Rogue Spotter series. The first book, Threats by Numbers, was so much fun because it was my first time writing a sweet but electrifying pairing and Lauren was a very different heroine for me as an introvert who survives by hiding her true nature. While Mathias is this giant lightning rod for danger, lol. He also makes an unforgettable first impression as you're about to see. Enjoy! 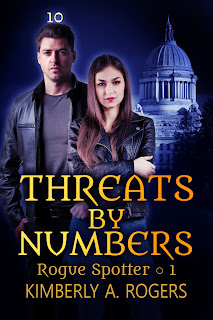 Picking up the phone from its cradle, I dialed the number for Sally's Savory Salmon. Despite the alliterative naming penchant, Sally's was one of the best catering businesses for local paranormals. Sally and Samson were pixies which meant they not only knew how to cater to our clients' tastes, they were also very good in situations like these when we couldn't call in the order until as late as possible. Any meeting involving a Coyote trickster required last minute arrangements to prevent further inciting incidents.
A gravelly voice answered, "Sally's Savory Salmon, whatcha want?"
"Hi, this is Lauren at Halliman's. I'm calling to arrange catering for a lunch meeting between two parties." My nerves steadied as I launched into the regular spiel. A lunch between Miriam our best relocator and the chief of the local Saquatch clan was normally easy to handle, but the topic of today's meeting made things tricky. No pun intended. The Sasquatch clan was appealing to Halliman's to have a Coyote trickster's pet Shunka Warakin removed since he kept letting it escape into their land. Given how particular Sasquatches were about their diets, we couldn't risk the trickster calling in any changes to the chief's wild caught fish and veggies. Not if we wanted to prevent the Sasquatches from going to war with the entire trickster clan, something that could quickly spread from Olympia to Seattle to the whole Pacific Northwest. A PR nightmare.
I started rattling off the order only to be told to wait right before I was put on hold. I listened to the eerie music playing before deciding it was whale calls intermixed with the occasional sea monster. The sound of voices coming from the hall directly to the left of my station caught my attention, and I lowered the phone slightly as I looked. I hadn't realized anyone was in the meeting rooms. Perhaps it was a budget meeting for the accountants we shared the floor with . . .
I put the phone back to my ear. Still on hold. Then, a delicious sound caught my ear. A British accent. No one at Halliman's had a British accent, much less a particularly delicious one. Curiosity made me look up again as the voice, male but not too old or too young sounding, came again. "The cameras will be replaced tomorrow and the rest of the updates to the lower floors shall be carried out in time to be operational Monday, Mr. Halliman."
Mr. Halliman's voice I recognized even as he came around the corner nodding and looking rather pleased. "Good, good. I knew you would be an excellent addition."
His words faded to a shrill ringing in my ears as I stared at his companion. He was long and lean, towering over Mr. Halliman who wasn't much taller than my own five-foot-two, with an air of classical handsomeness. I could see why Beth and the other girls called him a hottie, but that wasn't why I stared. Above his light brown hair floated a number I had never seen before, a 10 that seemed to blaze with searing heat.
I jumped when the phone hit the desk with a clatter. I glanced at the phone and then back up. Mr. Halliman and the man were both staring at me. I could feel my cheeks warming as I hurriedly mumbled an apology and picked the phone back up. The whales were still singing.
"Miss Hope."
I jumped again, almost dropping the phone a second time, as I realized the men were now standing by my desk. I met Mr. Halliman's concerned gaze and forced a smile. "Yes sir?"
"Have a puppy brought to Miriam's meeting. It will smooth things over."
"Yes sir, right away."
Feeling watched, I hesitantly peeked up only to freeze under blue-green eyes that looked more green than blue at the moment. They were piercing and considering as he studied me with an intensity that made my muscles tense with the urge to flee.
I quickly looked down again and prayed he couldn't hear how hard my heart was pounding. Everything in me screamed at me to run, but I forced myself to stay perfectly still in the chair. Mr. Halliman and Mr. 10 entered the lobby, their footsteps loud against the marble floor, as they headed for the elevator. But not before Mr. 10 stopped in front of the statue of Hermes positioned in our lobby. I tore my eyes away from him and stared unseeing at my notepad. It was all I could do to sound normal when Sally herself got on the phone. My mind whirled with one question. Did he know what I was?