I'm so excited to share my first Story Snippets post today! Lately, I've been working hard to complete Traitor, the second book in my Tales of the Mystics series. I've kept a copy of Common handy as a reference during my writing and editing process to make sure I keep things like names, geography, and timelines accurate. It's been so fun to both revisit familiar characters and places in this new book and add on to my cast and story world! Traitor is told from the point of view of Princess Penelope, who played a critical (though not necessarily positive...) role in Common but didn't get a lot of screen time.

Since I've been undergoing a more in-depth exploration of Princess Penelope's character in recent months, I thought today it would be interesting to take a look back at the scene from Common where she's first introduced. In case you haven't read Common yet, it's told from the perspective of Leah, a palace servant, who has a secret friendship with Prince Raphael and may or may not be developing feelings for him... :) Enjoy! 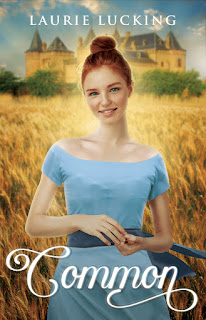 I pushed through the kitchen door into the dining hall, balancing a tray of steaming bowls of bouillabaisse. The party from Trellich had arrived several days before, sending the palace into a frenzy as servants readied rooms, hauled trunks, and prepared elaborate meals. Tonight, the entire palace staff had been recruited to serve at a banquet honoring our guests.

My steps faltered at my first view of the hall. Thousands of candles lit the walls, rendering the room hardly recognizable. Lavish floral arrangements spilled over their vases, nearly covering each long, rectangular table. They must’ve left the gardens practically barren.

I glanced to the head table. Rafe wasn’t seated at his usual post on the queen’s right. Instead, he was placed well to the left of the king and queen. On his right was a dignified, sharp-looking older man whom I presumed to be the King of Trellich. How odd—Rafe’s parents ordinarily kept their unenthusiastic son as far from foreign royalty as possible.

To his left sat the most beautiful young lady I’d ever seen. Her hair was almost as dark as Rafe’s, swept up in a stylish updo studded with jewels. Her large, amber eyes and porcelain skin glowed in the candlelight as she gave Rafe a shy, flawless smile.

I frowned, then shook my head and looked away. The beautiful Trellan princess was welcome to smile at Rafe all she liked. I had a job to do.

But my gaze returned to Rafe each time I emerged from the kitchen with a new platter. While the Trellan king did most of the talking, the princess remained involved in the conversation throughout. She shifted to survey the room, and I hoped she might open a dialogue with her other neighbor. Instead, she laughed at something Rafe said and placed a hand on his arm.

My foot caught on a chair leg. I straightened, irritation nipping at my stomach. I’m here to serve a meal, not spy on Rafe.