Happy New Year! I'm excited to start off Lands Uncharted 2020 posts with a review of a fabulous series. (I am also excited to publish this post on time--on Friday--since I'm used to our old Saturday posts.) When Laurie mentioned I had a similar sense of humor to fellow author Kyle Robert Shultz, I naturally decided to check out his books. As a writer and reader of fairytale retellings, I chose The Beast of Tales End (Beaumont and Beasley Book #1). The verdict: Laurie was right, of course.

These are definitely not your typical fairy tale retellings but are a delightful mix of 1920s detective story, Britishness, adventure, screwball comedy, and fairytales and mythologies turned inside out. You get a feel for the humor and strong character voice simply by reading the book blurbs, and, happily, the books don't disappoint. There are several stories in the Beaumont and Beasley series, and I've read the first two and a short story and am looking forward to reading more. 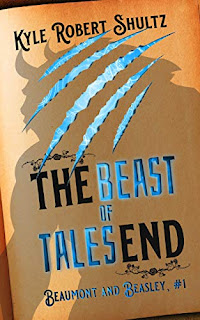 The Beast of Tales End: After Beauty and the Beast (Beaumont and Beasley Book #1)

Detective Nick Beasley makes his living (or tries to make his living, anyway) by cleverly explaining away all episodes of "magic and monsters." Until the day he gets turned into a monster himself, a beast to be exact. Not The Beast, of course, since that individual, Nick quickly discovers, lived a long time ago and wouldn't be recognizable as Beast from the beloved but utterly wrong fairy tale. But Nick is still a beast, at least until Lady Cordelia Beaumont can un-curse him. And that is where things get really complicated. 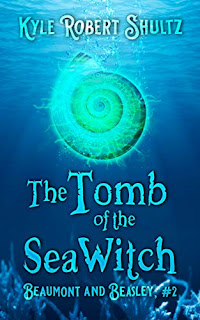 Where Nick Beasley used to be a pretty impressive detective, he's now a pretty impressive beast. He's had to put his impressive detective persona on hold since he's currently running for his life with the beautiful and dangerous enchantress who cursed him and his younger brother. Since hiding in a magic school for villains is obviously the best  place to hide from villains, the three go to the Warrengate Academy of Advanced Magic, which happens to be quite close to the sea where the Little Mermaid episode occurred. And since The Little Mermaid story was just as distorted as the Beauty and the Beast tale, things get dangerous pretty fast.

But what's dangerous for Nick, Cordelia, and Crispin happen to be fun for readers, so I highly recommend the Beaumont and Beasley series.

Have you read any of Kyle Robert Shultz books? Do you like your fairy tale retellings close to the original version or the Disney version, or turned on their heads?
Posted by Lizzie at 4:00 AM