Adrift by J. F. Rogers is the sequel to Astray (reviewed here) and is the second story in the Ariboslia trilogy. 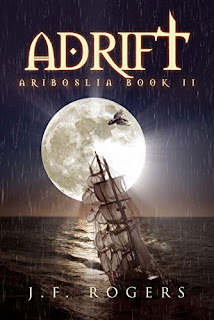 The long-awaited day has come, Fallon’s eighteenth birthday. Her chance to return to Ariboslia and aid her friends in the battle against vampire-like creatures—the fasgadair. This time, she knows what she’s up against. This time, she’s prepared.
Or is she?

Unlike last time, Fallon knows who her friends are. She knows her enemy. She knows her abilities and what her blood can do—redeem fasgadair. But how can she save a few when thousands want to destroy her?

Shortly after Fallon’s return, fasgadair overrun the last refuge and push survivors across the sea to a land from which none has ever returned. There they meet a hostile race. With enemies squeezing in on all sides, even infiltrating Fallon’s mind, she struggles to continue her quest. But if she fails to find her way back, the fasgadair will rule Ariboslia with no hope of redemption … and Fallon and her friends will die.

My thoughts: I loved the characters in book 1 and found the worldbuilding interesting. Unfortunately, the secondary characters I loved in book 1 were little more than cameos in book 2 (including her newly found mother). And including the love interest from book 1. The story line itself wasn't what I was expecting from the first book. The victory in the first book was seemingly worse than pointless, because when Fallon is allowed to return to Ariboslia a year later (beginning of book 2), a far worse enemy has been appointed to replaced the one killed in book 1. Now, the land if overrun and everyone not dead (seems like most of the world population) is fleeing.  I wasn't expecting all the death (though not graphic, you just hear about thousands dying while a small group escapes--not my cup of tea).

There's a good bit of adventure and quest-like feel to the book and I did enjoy some of the newer characters and places. But the lack of character-interaction continuity was a big disappointment. The biggest disappoint--really a MAJOR frustration to be honest--was what happened with Declan, the likable love interest from book 1. Granted, he was in an arranged engagement, but I figured that would get worked out by the series end and we'd get our happily-ever-after. [spoiler alert] Well, that's not happening because after 1 1/2 books of wishing for the happily-ever-after romantic relationship between Fallon and Declan, we learn that Declan is her brother. They're triplets. Not a fun joke on the reader. By this time a new guy has come on the scene. He's nice but we're under the impression at first that his and Fallon's attraction is all part of some  unavoidable selkie-gachen magnetism and that Declan will show back up in true form (he's been in hiding but secretly helping Fallon). I was hoping this brother thing was just soap-opera level drama made up by the cackling bad guy to distract Fallon. Nope. Declan's a brother and the "magnetism" thing is a lie.

While the writer definitely has talent and I did enjoy some aspects of this story, book 2 was not at all what I was expecting.
Posted by Lizzie at 4:00 AM