Be careful what you wish for!! Because it just might come true in Jacqueline West's fantasy The Collectors. Wishes seem like such good things. But what we think is just harmless wishing, might have unintended and disturbing consequences. For example, if you wished that dinosaurs still lived...I don't know about you, but I'm picturing Jurassic Park!! 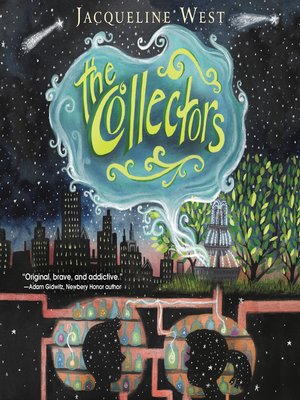 Or maybe you wish that aliens were real. Well, umm that'd be cool unless they were the ones in possession of a Death Star or something. So if you aren't very, very careful, your wish might turn out to be something totally unexpected. The ideas are endless. I wish everything would taste like chocolate!! Then a few months later, you hate chocolate (gasp) but what can you do now? Go drown your sorrows in more chocolate?

Fortunately, we have a mysterious group of people called the Collectors, and it's their job to "save us from ourselves". They are the unnoticeables who show up at birthday parties, wishing wells, ect... to grab that wish before it could potentially do harm.

Except one young boy does notice one. And follows her and her pet squirrel to an underground world of mystery and shimmery lights. However, all is not as it seems as the boy, Van, gets caught up in the world of those trying to stop dreams and those trying to let dreams run free. Who's right and who's wrong? Is it the man who gives him a cute little wish catcher animal, or is it the girl with the moss colored eyes and talking squirrel?

Interested? Check it out from the link at the beginning!

What about you? If you could have one wish, what would it be?
Posted by Julie Kitchens at 4:00 AM