It's pretty common for me to read book 1 in a series, like it, say I want to read book 2, but never go to the trouble of actually finding book 2 at the library or buying it. That being said, I actually bought book 2 in J.F. Roger's Ariboslia series. So it's my pleasure to tell you about book 1: Astray. 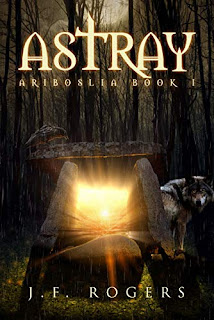 Fallon Webb lives with her grandmother, who's more like an unloving step-mother than a cookie-baking sweetheart. On her seventeenth birthday, said grandmother reluctantly gives her an amulet belonging to Fallon's mother, who disappeared after her father died. Not long after getting this strange necklace, Fallon is chased by a wolf into a graveyard and ends up in another world, where the wolf "chases" her to a village. In a world where many humans also have an animal form, vampire-like creatures are the ultimate villains, and Fallon no longer needs her glasses, she discovers her mother is alive. A prisoner of her vampire-ish uncle, who also wants her dead. And she is the one prophesied to destroy him. And she thought she had troubles on Earth...

There are a lot of great characters in here, along with an interesting story world. But back to the characters (who are what really drove me to buy book 2), I liked Fallon and the guy-she-wants-but-can't-have, but I particularly loved the mysterious wolf. There are other characters that also pulled on my heart strings, but I can't talk about them without spoiling things. But I'll just say there's adventure and romance and redemption and growth in Fallon's character that are all very satisfying. This is an overtly Christian novel, and while I liked the way it was handled for the most part, it felt a little heavy-handled at times and there was a character who could be annoyingly "too good" at times. But on the whole, I enjoyed the book and recommend it.

Have you read Astray? Or how often do you not pick up book 2's even if you liked book 1?
Posted by Lizzie at 4:00 AM