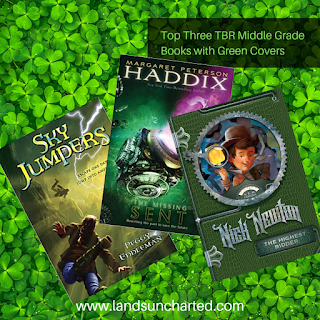 How about a little festive book fun, since tomorrow is St. Patrick's Day?

Green is not the most common color for a book cover, but some great reads that do feature it in an eye-catching fashion. Here are three middle-grade books with green covers from my to-be-read pile that may interest you.

About Nick Newton: The Highest Bidder

Nick, a merely average boy from the country of Thauma, has learned that one doesn't need to be a genius or wealthy to have amazing adventures. All one needs is to keep going. When Solomon decides to put Elizabeth the android back together, Nick promises to help in any way that he can. He learns many important lessons, like the value of a speck, and to dodge mechanical baby strollers, fencing sisters, and auction bids. If all goes well, he might even make a few new friends too.

Sent is the second book in The Missing series. You can find a review of the first book, Found, on my blog. Found began with the government cover-up of an event involving thirty-four babies who were put up for adoption, and then mysteriously drawn to investigate the incident thirteen years later. I enjoyed reading the first book enough to pick up the second, but it was the twist in the final reveal that had me splurge to pick up the whole series.

Jonah, Katherine, Chip, and another boy, Alex, have no preparation before they are sent back to 1483 at the Tower of London, with the promise that they can return to the present if they can repair history. They quickly discover that Chip and Alex’s true identities are the 13-year-old King Edward V and his 10-year-old brother, Richard, Duke of York. But before Chip can enjoy being the king of England, they discover that they are virtually prisoners—and that their uncle wants them dead. How can the kids repair time and return home when according to history, Chip and Alex were murdered?

I came across Sky Jumpers a few years ago, when I was putting my first book proposal together. A courageous, base-jumping heroine from a town of inventors was hard to resist. But, to be honest, I forgot about the book until I began writing this post. It got buried in my wildly, out of control to-be-read-pile. Maybe it's time to reprioritize the stack and move Sky Jumpers up towards the top?

Twelve-year-old Hope lives in White Rock, a town of inventors struggling to recover from World War III. But adventurous Hope is terrible at inventing. She would much rather sneak off to cliff dive into the Bomb’s Breath, the deadly band of air that surrounds the town.

When bandits invade White Rock to steal its greatest invention—priceless antibiotics—the town is left with a heartbreaking choice: hand over the medicine and die from disease, or die fighting the bandits. Help lies in a neighboring town, but the bandits count everyone fourteen and older each hour. Now Hope and her friends Aaren and Brock are only ones who can escape through the Bomb’s Breath.

For once, the daring and rebelliousness that usually get Hope into trouble might just save them all.

What green books would you recommend?