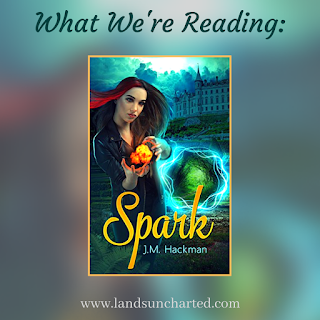 I actually read Spark last year. But, since the second book in the series, Flare, is coming out in February and the cover reveal for Flare was Friday, I couldn't resist posting about Spark. 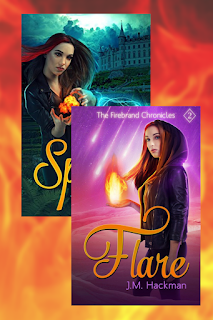 "I thought it was a weird dream. Is it a big deal?" -Brenna James


Sixteen-year-old Brenna James is a direct, down-to-earth, waffle-loving teen with ADHD. She's concerned about the upcoming history test until a flame shoots from her fingertip and catches the school's trophy case on fire.

More surprises await Brenna at home. She learns her family's connected to an alternate reality, where her mother's gone missing. Brenna must travel there with her father and grandmother while fighting off giant insect-like creatures guarding the portal. And that's only the beginning.

With the fulfillment of an ancient prophecy underway, Brenna James bears a burden few may understand. However, the spunky teen embraces life with humility and humor.

Spark showcases resilience, courage, loyalty, and a caring family dynamic with a splash of humor.


Brenna James wants three things for her sixteenth birthday: to find her history notes before the test, to have her mother return from her business trip, and to stop creating fire with her bare hands.

Yeah, that’s so not happening. Unfortunately.

When Brenna learns her mother is missing in an alternate reality called Linneah, she travels through a portal to find her. Against her will. Who knew portals even existed? But Brenna’s arrival in Linneah begins the fulfillment of an ancient prophecy, including a royal murder and the theft of Linneah’s most powerful relic: the Sacred Veil.

Hold up. Can everything just slow down for a sec?

Unwilling yet left with no other choice, Brenna and her new friend Baldwin (Um, hello, Hottie!) pursue the thief into the dangerous woods of Silvastamen and beyond. Exactly what Brenna wanted to do for her sixteenth birthday. Exactly. When they spy an army marching toward Linneah, Brenna is horrified. Can she find the veil, save her mother, and warn Linneah in time?

And more importantly, why on earth doesn’t this alternity have Belgian waffles?


Brenna travels to Linneah via portal to visit her boyfriend Baldwin, only to find heartbreak. Betrayal. A serious case of never, ever wanting to see him again.

So when her best friend Tiny invites her on a road trip to meet Tiny’s fiancé, Brenna jumps at the chance. Even if her mother disapproves. Even if it’s through a dangerous travel portal. Even if Tiny has never met this fiancé handpicked by her dad. Anything’s better than staying in Linneah.

But the trip disintegrates into disaster. The two friends are separated, Brenna is kidnapped, and not only are Brenna’s Firebrand skills tested to the limit, she must participate in the dangerous event, Starfall . . . or go home. Broke. Alone. With a shattered heart. So not fun.

And then as if that’s not bad enough? Brenna discovers a plot that could spell disaster for everyone she holds dear. And no one believes her.

Can she prevent a bloody government takeover? And what will become of Brenna’s broken heart?
Posted by K.A. Cummins at 4:00 AM