You've probably heard me gush about author Katie Clark before. First, her Enslaved series (which I reviewed here), then Shadowed Eden (which I reviewed here). But she recently released my favorite book of hers yet! We had the opportunity to interview Katie leading up to the release of The Rejected Princess (which you can find here), and now I'm excited to share my review! 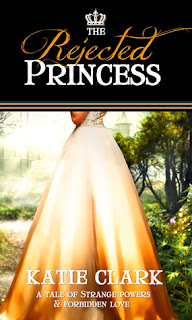 Princess Roanna wants to do her best to fulfill her duties to her family and kingdom, but her role becomes so much harder when her parents want her to marry Prince Roland of Dawson's Edge. Roland seems to be hiding something, and his presence causes strange sensations in her - almost as if she's developing one of the unusual powers her country has striven to eradicate. Her growing feelings for her close friend, Prince Ben, don't make the pending marriage any easier, either. When an attack from an unknown source puts her loved ones in danger, Roanna must decide where to place her trust as she uncovers secrets about her new fiance and her own family.


I absolutely flew through this book! Princess Roanna was very easy to relate to as she navigated difficult decisions between fulfilling her family's desires and following her own heart. Her friendship with Ben was sweet but laced with a palpable romantic tension. The mystery of her blossoming powers was so intriguing - where did they come from? Why did they manifest at some times and not others? How would people react if they found out? Adding the puzzle of the attacks got me turning pages even faster.

The setting had a bit of a steampunk feel to it, which was fun and different for a fantasy revolving around royalty. It was interesting to explore the perceptions the different countries had about each other and how they changed over the course of the book. I've always found Katie Clark's writing style engaging, and The Rejected Princess was no exception! My only complaint when I first read this book was that I wanted more of my questions to be answered at the end, and I'd seen no indication of a sequel. But I have great news! The author herself told me it's going to be a series and my questions will be answered in later books :) Yay!!

Bottom line: if you enjoy royalty-based stories in a more modern setting with romance, intrigue, and a dash of fantasy, I would highly recommend The Rejected Princess!


What book kept you turning pages recently? Have you read any of Katie Clark's books?