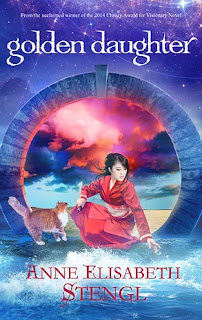 Secret societies, deadly assassins hidden as dainty maids or refined gentleman, a brother sold into slavery and rescued, an empire at stake. Anne Elisabeth Stengl's Golden Daughter contains all this and more. The seventh and final full-length novel of the Tales of Goldstone Wood series, it's a hefty book (570 pages), but well worth the read  (Note: I believe it was originally published as a series of smaller books).

Sairu is a Golden Daughter, which means that, officially, she doesn't exist. But, like her sisters, she's very much alive and very thoroughly skilled in disguise and in detecting and eliminating threats to whomever may become her master and husband. But unlike her sisters, Sairu doesn't wish to serve anyone unworthy, and so instead of becoming a wife and secret-protector to a king, she chooses to protect a Dream Walker from the moon goddess's temple. This puts the Golden Daughter in the way of the equally legendary and dangerous Crouching Dragons.

After Sairu joins the Dream Walker's service, she is commanded to guide her mistress safely to a distant temple. Many are their adventures as she tries to determine the strange illness besetting her mistress, the trustworthiness of an orange cat with unusual abilities who seems to be trailing them, and just who it is that's trying to kill the Dream Walker. And what to do about the handsome slave she helps rescue. Even aside from all of these issues, keeping her mistress safe is a much bigger job that Sairu anticipates, for the Dragon is after her as well, with a deadly plan as far-reaching as the Moon.

Brothers Sunan and Jovann are also important characters. Sunan, a weak, cast-out man who wants desperately to become a scholar, to be as different from his nomadic, barbaric tribal-leader father as possible, is forced into becoming one of the Crouching Dragons. Jovann, Sunan's favored younger brother, possessed of secret abilities, wants to further this father's cause of revenge against the entire empire, but is kidnapped and sold to slavers. Their paths take unlikely turns and will affect both an empire and the heavens themselves.

With an Eastern-like setting and featuring only the beloved faerie cat Monster (Eanrin) from the early books, Golden Daughter feels a good bit different than its predecessors at a surface level. Yet, Stengl's prose is just as lyrical and her story world as rich as ever. I must admit that the prologue was a little slow and confusing (but it was set in the dream world, so that is probably why), but I very much liked the book overall. With adventure, endearing characters, romance, beautiful prose, and intriguing plots, what's not to love? Though it is the seventh of the Tales of the Goldstone Wood series, you don't have to have read the earlier six to read this one. It is a richer story if you have, but it isn't necessary.
Posted by Lizzie at 4:00 AM