Today we get to be part of the blog tour for The Final Paladin by T.J. Akers! I'll include more information about the author and blog tour below, but first - my review :) 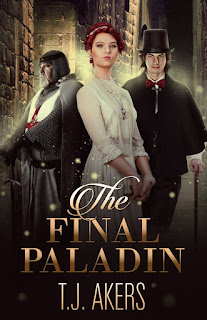 Wow. This book was one wild ride, and I'll be honest that I'm not sure I completely followed everything that happened! Peg Bowman is on her typical walk home from work when she finds her kind, simple older brother murdered in an alleyway in a bad part of town. She hardly has a chance to react before she finds herself under attack. As she fends off her assailant, a carriage drives up delivering an unusual group of rescuers, including Sir Godfrey, a chivalrous knight, Jack, his mischievous, silent squire, and Chim, a witty kobold who may or may not be trustworthy. Peg, now alone with no living family aside from her institutionalized mother, reluctantly agrees to travel with them, hoping to learn more about her brother's murder and how she can free her mother.

Peg's new companions reveal that she is descended from a long line of Paladins, who are entrusted with guarding a mysterious relic called the Key of Apollyon. But before she can learn more about her inheritance and the accompanying dangers, their journey is waylaid by terrifying mythical creatures, and Chim seizes the opportunity to drag Peg into the Ether, a land inhabited by pixies, goblins, and fairies. Peg finds some answers and many more questions in her struggle to return to the human world, all leading to her final decision: should she embrace her role as a guardian of the Key of Apollyon, and if she does, will she be able to resist the temptation of its power?

The author's writing style added a very distinct flair to this book as a whole, and specifically Peg's voice. Every phrase was colored by her upbringing in the slums of New York, which was very fun and really grounded the book in its setting, but also could be distracting at times. Peg was an interesting character, full of spunk and sass and not afraid to speak her mind. The fast pace of the action made it hard to get to know her as well as I would've liked, but hopefully there will be more opportunities in the rest of the series! My favorite character was definitely Jack. He'd clearly been through a lot in his life and definitely had a dark side, but I loved his sense of humor and mischief. Sir Godfrey was everything I would've expected from an eleven-hundred-year-old knight, but he had a good depth to him and it was fascinating to find out more of his backstory throughout the course of the book.

Akers' vivid descriptions made the imaginative Ether come to life, even though I often got confused by the complex set of rules and allegiances that governed the fairy world. Even minor characters had vibrant personalities, and I was wavering right along with Peg on who could be trusted and who might turn on her. The ending did a great job wrapping up the primary story line but leaving open questions and new goals for future books. Even though I typically prefer books that are more character and relationship based, The Final Paladin was a fun adventure and an enjoyable read!

The Final Paladin is available for purchase here. Make sure to stop by the Facebook party celebrating the book launch next Thursday, November 16th! (I hear there will be giveaways for movies and even a computer!!) The full blog tour schedule can be found here. And here's the back cover blurb:

Life for Peg Bowman is rough in the infamous slums of Five Points, New York, but her brother’s murder changes everything.

Thrust into incredible worlds beyond any story she’s ever heard, Peg meets Sir Godfrey, an eleven-hundred-year-old knight from Charlemagne’s court, trainer of Paladins. He reveals to Peg her family’s ancient obligation to protect the Key of Apollyon, a relic of immense power. She is the last descendant of the Paladins and his only hope for keeping it safe.

When Godfrey confides her brother was murdered because of the Key, Peg rejects her calling and demands revenge, a luxury she can ill afford as otherworldly creatures seek her death to claim the Key’s power for themselves.

Can Godfrey and his faithful retinue—Chim the Hobgoblin, Rebecca the Jewish Maven and healer, and Jack the sometimes human and sometimes seven-foot Black Dog—keep her safe and convince her that her calling is worth pursuing? Or will she succumb to the Key’s lure and wield it for revenge? 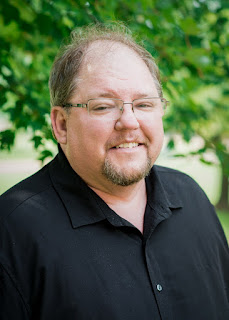 T.J. Akers desires to be a multimillionaire when he grows up and give his wealth to his favorite causes: churches, schools, and animal shelters. Since the millions have been slow in coming, he’s settled for working as a computer technician for a state university and volunteering at his church and local animal shelter. Whenever possible, he indulges his love of writing stories to entertain people, especially younger readers. Akers holds a Masters of English from Minnesota State University, Mankato, and can often be found roaming the university’s library, especially the children’s and young adult sections. Librarians have always been his heroes. He lives with his beloved wife of thirty years, his dog, and two cats. The dog is an excellent writing companion, but the cats have proven to be rather critical. Learn more at www.tjakers.com.

Congratulations on your new release, Tim!

Do you prefer books that are fast-paced, or slower books focusing on character and relationship development? Have you read any books where the writing style produced a very distinctive voice or connection to the setting?