Book Reviews: The Bonemender and The Amaranth Enchantment (Lizzie)

I'm reviewing two books today because I happened to stumble across them on the same ill-fated library visit (ill-fated because I had gone for the second book in Lisa Bergen's River of Time series but couldn't find it, not because the books were bad).


The Bonemender by Holly Bennett 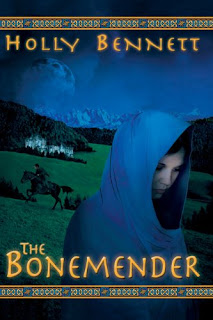 Though the daugter of a king, twenty-seven-year-old Gabrielle spends her days working as a bonemender--a healer. But unlike any other healer she knows, Gabrielle can "see" in a wound and heal it with her hand, mentally piecing bones and vessels back together even. This unique gift allows her to save the life of a stranger brought to the castle after being attacked by a wild boar. This stranger, Danais, and his companion, Feolan, turn out to be as unique as her gift. They are elves, a race rarely been seen since the last fight with the cruel Greffier of the north. The elves are scouts, and unfortunately, have bad news to report: the Greffier are again preparing for war and their massive army is soon to pour through the mountain passes to overtake the peaceful kingdoms of the Krylian Basin, both the human and the hidden elvish ones.

While Danais is recovering, and Gabrielle's father and brothers are busy preparing for war, Gabrielle and Feolan fall in love. But their  love seems doomed even as it begins. Elves live for centuries. Humans do not.


Though written in an older, more "telling" style, The Bonemender is an engaging story and certainly one that I'm glad I stumbled upon. The characters are brave and noble and endearing. Gabrielle is a kind and strong heroine, brave and both willing and able to lead the bonemenders in the war. Apart from the likable characters, I also appreciated Bennett's handling of the different cultures. Their unique languages and customs gave the story an authentic feel and us a glimpse of what it would be like to travel in a land far from our own.


The Amaranth Enchantment by Julie Berry 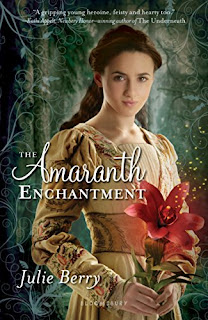 Lucinda is the orphaned daughter of a wealthy couple. She’s lived with her uncle and abusive aunt since she was five and now is little more than a mistreated servant in their poor jewelry shop. Then, one fateful day, Prince Gregor visits the shop (and Lucinda is instantly smitten) and a mysterious woman called the Amaranth Witch leaves a large stone to get a new setting. Suddenly, things are happening in Lucinda’s life. The stone is powerful and wanted by many, including a young thief named Peter and the man who murdered Lucinda’s parents.

Lucinda's aunt kicks her out and she finds refuge in her parents'  old house, now owned by Beryl, the Amaranth Witch. Together, they seek to regain the stone and defeat the man who killed Lucinda's parents.

While entertaining, I was disappointed with this book. The setting was not firmly established and the relationship between Lucinda and the prince was nothing more than a “love at first sight” type thing instead of a real relationship (this isn’t a short fairy tale and so requires more than three or four short, unimpressive conversations in my opinion). Initially, I assumed the story was set in a make-believe world, since it was fairy tale-like and didn’t plant itself immediately in a known time or location. Then, out of the blue, there are references to French phrases and a random man quotes a Bible verse about goats and sheep being separated (Lucinda’s walking by with a pet goat) and Lucinda mentally “insults” him as a Calvinist and a fanatic. Apparently, we were in Europe. Then Beryl, the Amaranth Witch, tells Lucinda she’s from another world, but I wasn’t expecting elements of a portal fantasy, so it felt like aliens had landed despite the lack of a space ship (Beryl came through a well). So the Amaranth Witch turns out to be from another world and not a witch at all. Her kind and home world are apparently good inspiration for heaven and angels… The story had Cinderella tie-ins, which, depending on my mood, may please or displease me. I was anticipating a unique story here so the connection disappointed me. The ending was also clumsily done. Overall, the story was entertaining and I liked the main character for the most part. I also like Beryl and the prince. It's not a bad read, but it could have been much better.

What books have you stumbled upon in the library or bookstore that you liked? Are you ever disappointed by a fairytale re-write (especially if you're not expecting it), or is a tie-in always a plus for you?
Posted by Lizzie at 4:00 AM