With the release of Wonder Woman, I began thinking about what exactly a hero is. (My thoughts on heroines, I'll save for another time.) Because my dictionary is still packed downstairs in the basement after a recent flooring project, I checked the internet for an accurate definition. The definition of hero is "a person who is admired or idealized for courage, outstanding achievements, or noble qualities."
In every story, they're easily identifiable: Harry Potter from the Harry Potter series, Percy Jackson from the Percy Jackson series, Eragon from The Inheritance Cycle (by Christopher Paolini). But what about those heroes that are overlooked, sometimes due to the sheer brilliance of the main character's deeds?
Although I have favorites from movies and television, this time I stuck only to literary heroes. Below are my favorite overlooked heroes.


3. Neville Longbottom (from the Harry Potter series):
Harry Potter's friend was often portrayed as a bumbling, awkward student. Despite this, his loyalty to Harry and his friends was always evident. Neville lead Dumbledore' army and his willingness to step forward and openly defy Voldemart in a crucial moment solidified him as a hero.

2. Prince Arpien (from Waking Beauty by Sarah Morin):
While there is an argument to be made that Prince Arpien is the hero because he woke Princess Brierly,  he's not your typical hero. He's not tall or buff, he's not a great commander, and as a third son, he doesn't carry any political clout. But he does what's needed when it matters. We see his insecurities and his struggles. He makes the difficult decision to support another country rather than his own when they try to start a bloody and unnecessary war.  And when most people would have given up on the princess, he sticks around, showing his persistence and compassion. 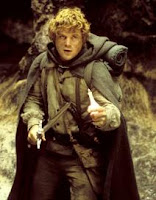 1. Samwise Gamgee (from The Lord of the Rings series):
This character was almost lost behind all the dashing deeds of Frodo Baggins, Thorin Oakenshield, and Aragorn II. Over and over, we read how Sam stayed by Frodo's side, carried him when he grew weak, and even carried the ring at one point before giving it up (voluntarily). Near the end, he continued his quest with Frodo, journeying into the center of Mount Doom. (Anybody who's willing to follow you into a volcano called Mount Doom is a good friend!)

What about you? What literary (or pop culture) figures do you consider unexpected heroes?